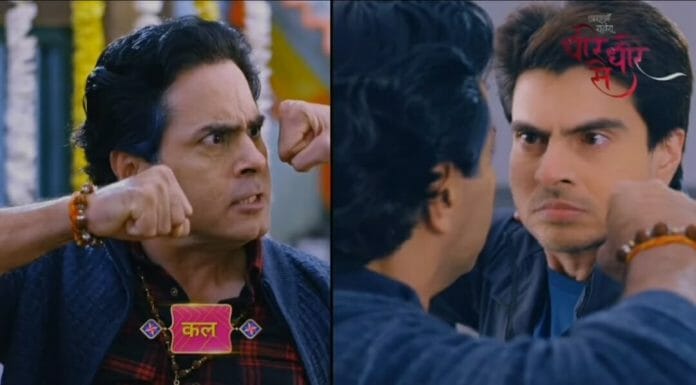 Star Bharat’s show Dheere Dheere Se is gearing up with an interesting drama with Bhanu getting back his tempo and the Shastri’s celebrating it and Raghav requests the Shastri’s not to celebrate this way. Now it will be interesting to see what will happen next?

Will Shastri’s listen to Raghav’s words? How will Raghav stop the Shastri’s choice of celebration which may harm other’s? What will be the reaction of Bhawana after she learns Raghav slap Amit?

In the current track it shown that Bhanu gives Deepak’s photo to Bhawana and asks her to throw it out of the house shocking everyone. He then says because of what she has done now Deepak must be crying and accuses her for insulting them infront of Abhishek’s in law’s also asks her the reason behind not reaching the engagement on time.

Meanwhile Raghav gets tensed when Brij Mohan asks him why did he hide it from him what happened in the court and demands an answer from him. Here both Bhanu and Malini gives a final warning to Bhawana to not to repeat any of this. They both then puts up an act to shift to another room which Bhawana and Aanchal is supposed to shift.

Bhawana pleads them not to do this as they may suffer and promises to shift her things to another room in a day then goes inside with Aanchal. Raghav gets relieved when Brij Mohan tells him that he is talking about the builder’s threat. He also then gets praises from Brij Mohan which makes him happy.

Swati gets determined to throw Raghav out of the house soon. Bhanu returns Afsal Khan’s money but he puts up an act infront of the latter’s clients so they leaves which leads Afsal Khan to look for an opportunity to make Bhanu suffer. The Shastri’s celebrates by burning the fire crackers when Bhanu brings back his tempo.

Aarav gets hurt so Raghav requests Amit to not to use fire crackers to celebrate but Amit taunts him. Raghav gets furious and slaps Amit which shocks everyone.

In the upcoming episode it will be shown that both Raghav and Bhanu will hold each other’s shirt and raises their fist at one another. Bhawana will shout Raghav Ji. Raghav will looks at Bhawana and the latter will scold him.

Later Malini will question Bhawana her connection with Raghav as he let go of the fight after she asked him not to. Bhawana will remain silent and Bhanu will looks on.