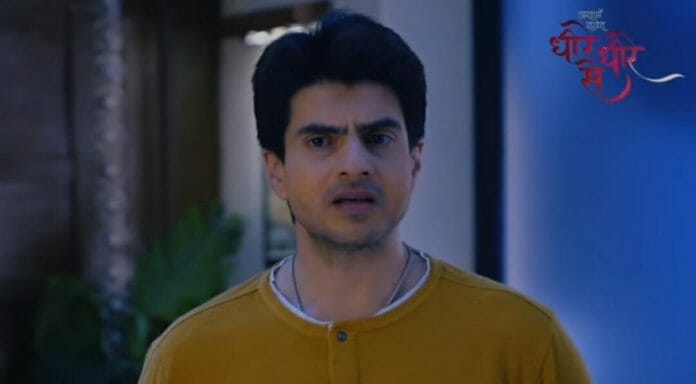 Star Bharat’s show Dheere Dheere Se is gearing up with an interesting drama with Raghav requesting Brij Mohan to end their fight with the Shastri’s while Bhanu gives only fifteen thousand to Bhawana and asks her to fulfill her needs with the part amount shocking the latter.

Now it will be interesting to see what will happen next? What will Bhawana do? Will Aanchal sacrifice her happiness for to fulfill her late father’s dream? Will Bhawana be able to fulfill both her late husband’s wish and Aanchal’s happiness?

In the current track it shown that Aanchal tells Bhawana that Vikas is getting support from the Srivastav’s so they don’t have chance to win this case then why she is being stubborn. Bhawana tells Aanchal about the promise Deepak made her when she was born but unfortunately he passed away so his dream to live in the upstairs room with his family didn’t get fulfilled so she is trying to fulfill his dreams but if Aanchal doesn’t want this then she will backaway from this.

Aanchal agrees to support Bhawana’s decision which makes Bhawana happy. Meanwhile Raghav gets shocked hearing Brij Mohan’s instructions to Vikas to ruin the peaceful life of the Shastri’s also assures to win the case. Raghav feels bad for Bhawana. Later Raghav advices Brij Mohan to let go of his hatred for the Shastri’s and focus on themselves for their own good but Brij Mohan refuses.

The next day Bhawana fails to convince the lawyer who is upset for not receiving his fee so she decides to talk to Bhanu about this and get money for both Aanchal’s school trip and lawyer’s fee. Bhanu gives her part amount and asks to decide what’s her priority and use wisely. Bhawana gets shocked.

In the upcoming episode it will be shown that Bhanu will say to Malini that he is sure Bhawana will use the money given to her for Aanchal’s school trip. They will get an opportunity to sell the upstairs room as there is no hope left and Bhawana will remain their servant for their entire life.

Later Bhawana will say to Bhanu that she paid lawyer’s fee using the money he gave her which will shock Bhanu.