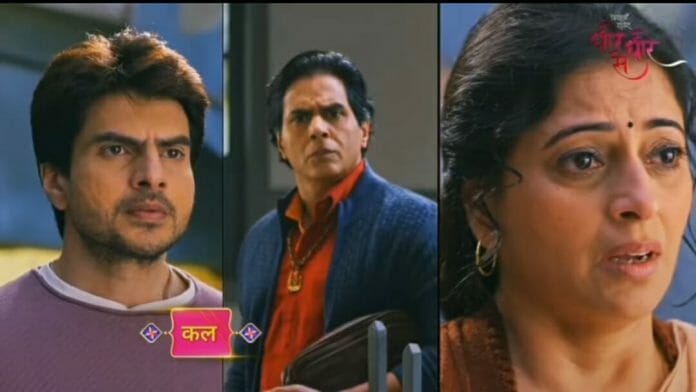 Star Bharat’s newly launched show Dheere Dheere Se is gearing up with an interesting drama with Raghav warning Verma other side Bhawana learns the beneficiary name can’t be changed so she gets upset. While Swati learns about Raghav’s lie to Brij Mohan so she decides to use it in her favor.

Now it will be interesting to see what will happen next? Will Swati get succed in her plan against Raghav? What will be the reaction of Brij Mohan after he learns the truth? Will Raghav learns Swati’s evil plan against him? Will Bhawana’s decision to credit the insurance money upset Bhanu?

In the current track it shown that the office staff’s gossips about Raghav with his wife. Meanwhile Abhishek shows Meera’s photo to Bhawana and asks the latter for her approval. Bhawana scolds him and asks him to leave the place. Abhishek refuses and makes Bhawana see the photo of Meera and gets her approval. Abhishek talks to Meera on the call.

Raghav reminisces his memory with the office which makes Brij Mohan happy. The latter introduces Verma to Raghav. Verma suggests to help Brij Mohan to find the person who damaged his car. Raghav stops him and takes him with him. Abhishek makes Bhawana talk to Meera. Bhawana have a conversation with Meera.

Meera feels weird by Abhishek’s attachment with Bhawana. Her mother advices her to not to become like her. Meera assures her the same. Raghav reveals the truth to Gaurav and asks him to delete the footage for Bhawana’s sake. Gaurav agrees. Raghav and Verma advices one another. Verma taunts Raghav by bringing up his past and Raghav warns Verma for the way looking at the lady staff’s of the office.

Verma gets angry. Swati learns about Raghav’s lie to Brij Mohan so she decides to use this opportunity in her favor. Bhawana gets upset when the officer informs her beneficiary name can’t be changed. She decides to credit the money to her account then gives it to Bhanu but worries making mistakes.

In the upcoming episode it will be shown that Raghav will stop Aanchal from jumping from the balcony. He will enter the house to save Aanchal. Bhawana will get worried seeing Raghav in their house. Raghav’s revelation will shock Bhawana. Bhanu will arrive there. Both Raghav and Bhawana will looks on worried.