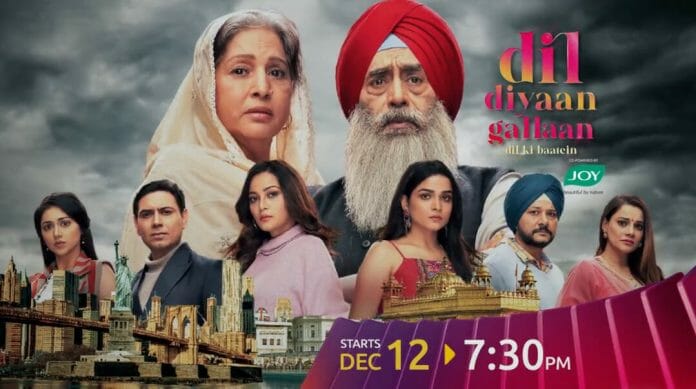 The episode starts with Amrita disconnecting the call hearing Sanjot’s voice. Maan wonders whose voice it is. Sanjot informs her that Dilpreet went to fight with Kushwant and she should do something. Noone is available to help Dilpreet right now. There Randeep calls Ria and asks if she truly loves Veer? She replies yes and Randeep says then he would put full efforts to convince Nimrit so that she can marry Veer. He asks Ria that if Veer too loves her? Ria recalls her moments with Veer and says he also has feelings for her. Randeep smiles and cuts the call. He tries to talk to angry Nimrit. Nimrit says Ria has lost it and she will take her back to Delhi right now. She doesn’t want Ria to commit the same mistake like she did by marrying Randeep. Randeep gets offended hearing that and Nimrit says she didn’t mean to hurt him. There Amrita calms Sanjot down saying she will handle everything. She goes to help Dilpreet saying she knows Karate. Sanjot prays nothing should go wrong.

Dilpreet throws water at Kushwant in his house. He starts beating Kushwant with stick for hurting Veer. Kushwant mocks him and says he has become old. Kushwant’s men hold Dilpreet tightly. Kushwant says he didn’t even stop his son from leaving for abroad. Because of Dilpreet his sister couldn’t marry Maan. Maan betrayed his sister and he used to consider Maan as his brother but the latter cheated him too. Dilpreet says he apologised to Kushwant’s sister years ago and she forgave him too then why Kushwant is holding grudges. He hurts Kushwant’s ego and the latter gets furious. He says he won’t spare Dilpreet for insulting him. He will teach him a lesson, he is about to punch Dilpreet but Amrita comes in between and gets punched by Kushwant. She bleeds and Dilpreet gets shocked seeing her.

Ria goes to Veer and holds his hand to ask if he needs anything. He murmurs Amrita’s name saying don’t leave me. Ria gets stunned hearing her name and leaves the ward. She breaks down to tears and says Veer took Amrita’s name which means he loves her not Ria. Ria gets heartbroken saying why these Americans always snatch things from Indians. Dilpreet asks Amrita if she is fine, he attacks Kushwant for raising hand on a woman. Amrita says he did right and she recorded it in her phone. She will circulate it on social media and Kushwant will go to jail for his deed. She threatens Kushwant to pick Dilpreet’s watch and give him. Kushwant obeys her and Dilpreet leaves with Amrita. Nimrit tells Randeep that Ria should not make anymore sacrifices after marrying a poor guy. She should enjoy her life, Nimrit says love is not enough always. Randeep says Dilpreet will give all his property to Veer then what’s wrong. His business is going on well too. Nimrit says she will judge on the basis of the present situation. Lucky comes to Ria and reveals he got beaten by Kushwant who was looking for Dungar Pal. He also adds Veer is Professor Dungar Pal. Ria says it means Amrita came to India for him only.

Dilpreet asks Amrita why she came here to help him. He asks her the reason of her favours on them. Amrita thinks if she can tell the truth or not. She says she has no logic behind helping them. Her heart wants so she helped them. Dilpreet blesses her. Ria says why Amrita is here if she doesn’t know about Dungar Pal. Lucky says Veer wants Amrita to stay here to end the differences in the family. Ria says she can’t let Amrita stay here forever. She has to leave for New York by tomorrow.

Precap- Ria tells Veer why he kept his profession as secret? Veer tells her to not reveal this to anyone. Ria asks not even to Amrita.