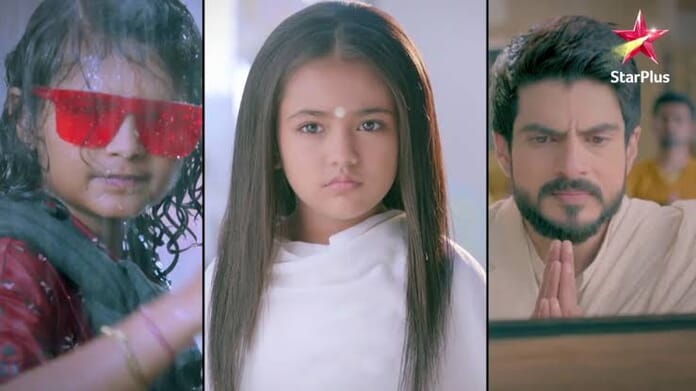 Show Dil Jaise Dhadke Dhadakne Do is witnessing high voltage twists and turns.
Since the show is on break due to the Covid-19 outbreak, here we are taking you down to the memory in which Iti rejects Yug’s friendship and Yug is left dumbstruck.

Earlier it’s seen that Bhavini kidnaps Iti and presents her as a goddess in front of Devguru. But Iti still does not accept her self as a Devi, she keeps mentioning her family and Yug. Bhavini gets tired of this so she comes up with a new cunning plan, she makes  Iti’s mother hologram and presents in front Iti, in that Iti’s mother tells her that she is born to liberalize the world. You came here to help people, you are not like other children, you’re special because you are blessed with divine powers. And now this is your duty to show the universe right path because you are a Devi. Iti gets caught in this plan of Bhavini and considers herself a goddess.

After some days Yug arrives at Banaras’s Devidham Asram to rescue Iti from Bhavini. He very cleverly sneaks into the ashram and goes to meet Iti. When she sees Iti he becomes very happy and in happiness, he hugs Iti. And then he asks her to escapes from here as soon as possible. But Iti denies going with him. Yug asks her but Why. Iti says I cannot come with you because I am no longer from your world.  Yug says, what nonsense are you saying?

Iti tells him that I am not Iti, I am a goddess.  Yug gets surprised by her statement, he says, You come into the talk of that child thief Devguru.  Try to understand that you are not a goddess, this goddess drama is a myth. Iti then tells him that he doesn’t speak ill about Devguru he is my shubh chintak. Yug says, i think they cast a spell on you, that’s why you behaving nonsense. Iti says, you can’t understand because you are a normal human being, my mother came to me and tell me that I am blessed with divine powers.

Yug says, Iti believe me, you are not a Devi you are my best friend Iti. These child thief fooling you. Iti angrily tells him can’t you understand my words in one go. I already told you I am Devi. So it’s better you leave from here otherwise I have to call my servant so that they can get you out from here. Then Iti give him his doll and says this is your last thing which I have. So take this with you as now we are no longer friends. Yug with a sad heart went from there.

Yug’s heart starts to ache, as the friend, he adores the most and can die for her. She breaks their friendship so easily. Yug thinks, even if we die for the rich, even then they will only humiliate us like Iti has today molest their friendship. Yug later vows that he will become rich so no one can humiliate his friendship again.

What will happen next in Dil Jaise Dhadke Dhadakne do, will Iti understand that she is not a Devi. Will Iti be able to get out of Bhavini’s conspiracy. Will Yug and Iti meet again.

All these questions will be answered soon in the next episodes. For more interesting updates keep watching this space.