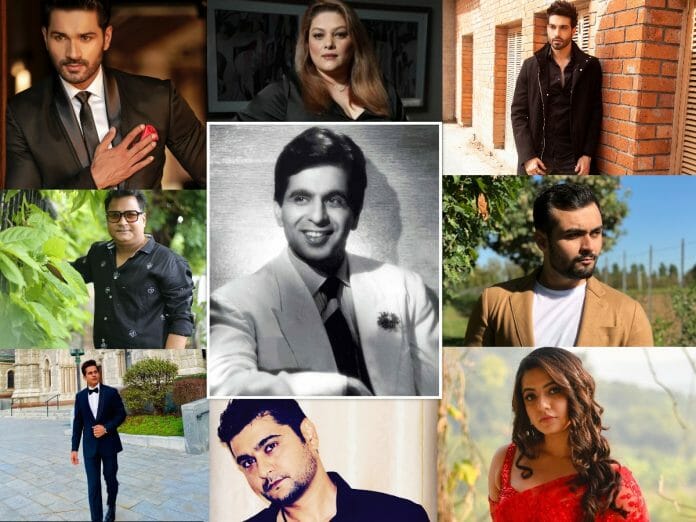 Dilip Kumar, the doyen of Hindi Cinema, breathed his last on Wednesday. He was 98. The legendary actor is survived by his wife, actor Saira Banu. The news of his demise has left the entire film fraternity, his friends and fans across the globe, shocked, sad and in mourning. Celebrities offer their condolences to his family, talk about his contribution to Hindi cinema and what they have learnt from him. They also tell us about their favourite film of the artist, whose expression, signature smile and the way he put life into his characters on screen continues to impress and inspire many.

Meera Deosthale
It was heartbreaking to know Dilip Saab is no more. He was an actor par excellence. We used to watch his films on TV with family. He was my parents favourite actor. I loved his Karma, Saudagar and even Kranti. His dialogue delivery and expressions reflected his craft. He will be missed. He lived a content life and had a perfect life partner in Saira Banu who cared for her. Such an amazing career graph Dilip Saab had. There will be no Dilip Kumar again. He is irreplaceable and will live through his films.

Amit Sarin
India woke up to the news of the sad demise of legendary actor Dilip Kumar. He was not just a legend, but a learning institution in himself. Watching his movies have made me become the actor I am today. His work and his movies are an informal training of acting and I am sure he must have inspired many actors in one way or the other. It’s so difficult to pick one movie of his, but I have loved Mughal-e-Azam, Ram Aur Shyam, and Devdas.

Shobhit Johri
Dilip Kumar was and will always be an institution in himself. He represented an era of Hindi film industry. Nobody can comment on his contribution, it’s simply immeasurable. He was known as the tragedy king. Naya Daur is my favourite movie. Nobody can touch his level of finesse in acting.

Mrunal Jain
I loved Dilip Kumar in the films such as Aadmi and Bairaag. He is my father’s favourite actor too. I will watch his film today for sure. I couldn’t meet Dilip Saab in this lifetime but I have seen most of his films and have seen how articulate he was in tragic scenes. He is and will always be my inspiration.

Sneh Binny
Dilip Kumar ji has contributed enormously to the Hindi film industry. I can’t believe that he is no more. He was a legend in the true sense of the term. There is so much that we all have learnt from him. My favourite Dilip Kumar film is Devdas.

Ashish Srivastav
He was one of the greatest actors of Hindi cinema. Dilip Kumar has inspired and will continue to inspire actors in more ways than one. I liked every film of Dilip sahab but the ones closest to my heart are Mashal and Shakti. He will always remain the face of the Indian cinema, may his soul rest in peace.

Vijayendra Kumeria
Dilip Kumar is one actor who has been an inspiration to all newcomers and even megastars we have in our industry now. I have seen his movies and always loved the fact that he used to look the part every single time. Whether a village boy or a businessman or a cop or a gangster, he was convincing in everything he did. His star status never overshadowed his performance. His body language and significant pauses during dialogue delivery were awesome. I have tried to learn from him that acting is not just about delivering lines, it’s also about those correct pauses0. I love watching his films Shakti and Ram Aur Shyam. May his soul rest in peace.

Chandni Soni
Dillip Saab’s demise is like the end of an era in Indian cinema. His contribution to Hindi film industry has been tremendous and his work has been appreciated internationally as well. The kind of sincerity which he would put into any role is something I really admired about him. With twinkling eyes and charming smile he conquered the world. Mughal-e-Azam to Devdas to Karma…. It’s so difficult to find one favourite film of Dilip Kumar. Allah unhe jannat bakshe.