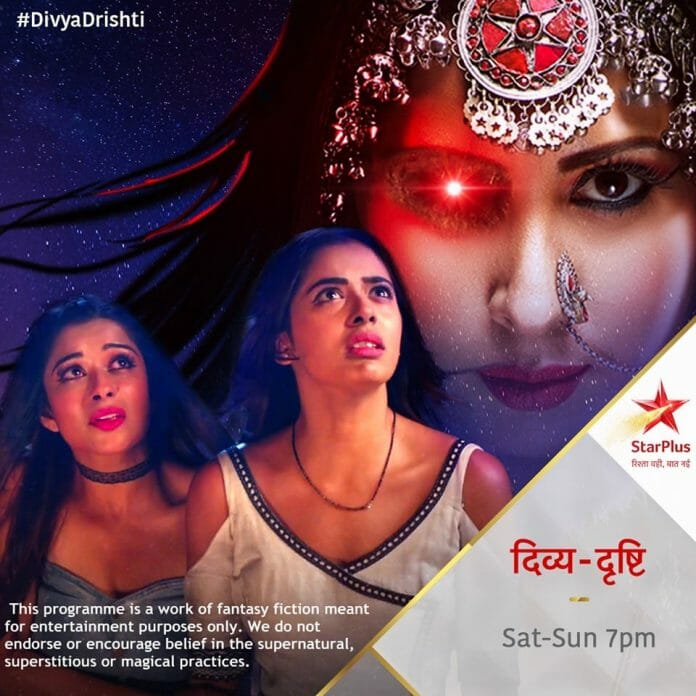 Episode begins with Patali is roaming in the garden and she collided with a tree tub when Pishachini comes there and noticed the tunnel. Everyone in the Shergill house is getting ready for the play. Divya is getting ready for playing the role of Laila when Shekhar accidentally enters a room of Divya. Shekhar went to call Mahima and says to her that my mother is calling you and address her as “Badi ma” while Shekhar is finally successful in getting back his magical tool. Patali comes in the room of Divya and she gets the stripes of Divya’s hair.

Shekhar finally gets a chance in the room of Mahima to steal the wealth of the family. He opens the cupboard and sees so many jewellery and money is kept inside. He is trying to take as much as he can in his bag. Romi is passing by the corridor but he stops to think something is fishy. Pishachini enters the tunnel find out who dig this tunnel by doing magic. The imposter Shekhar steals the jewellery and money of Mahima but the hides in the cupboard when he sense someone is coming. Comes at the outbuilding of the house where Pishachini leaves. He digs some more soil to complete the tunnel. pishachini develops a doubt and apply some magic to check who did this tunnel and what is there on the other side of the tunnel.

Pishachini gets to know about the reality of imposter Shekhar and Sher decides to find out further about him. Patali does some magic with the hair strips of Divya so that she can take the place of Divya in the play and can act with Murari as Laila. An angel appears in front of Patali and save this solution will last for 2 hours and you will only get a body like the person whom you want to become but not the mentality and the behavioural approach. Hence you have to be very cautious or else you will get caught. Everyone in the house is very much excited for the play. Pishachini is keeping an eye on Shekhar 24/7. She is trying to find out what he is up to. Pishachini says from the other side why no one is bothered about he is being in a hurry. Patali drinks the solution and slowly she transforms in Divya. Pishachini comes in the room and gets shocked to see that Patali has transformed into Divya. She says that you are a dimwit and you need to focus on your actual goal rather than doing all this so get back in your original form but the partly doesn’t pay attention to her works and caged her with her magic and left the room.

Divya gets ready for the play and she is taunting Shekhar for being so careless and casual in attitude. She says to him that he should be with his mother and be attentive for the play as everyone in the house is doing all this for his sake. Shekhar thinks why she is always talk to me in a rude way?

Shekhar is trying to find a chance to go to the out building to complete the work of tunnel and escaped from the house but some or other way he is being interrupted.Patali comes in the hall and watches everything from a corner and things she needs to get a chance to replace herself with Divya so that she can play the role of Laila with Murari.

The guest has started to appear in the house to watch the play. Rakshith comes to his mom and thanks her for pairing up Shekhar with Divya. Drishti come there and listens to his talks and says to Mahima Rakshit is forcefully trying to make the pair of Divya and Shekhar and she is not much approved of it and calls him unromantic. Rakshit you are taunting me for not being romantic? As far as I know my Laila becomes breathless if I start to romance with her.

Rakshit and Drishti spent some romantic moments with each other when they get interrupted by a family member calling them. The play has started in the hall and Divya appears on time while Shekhar got late. Ash brought him in the hall and both of them perform as Laila and Majnu beautifully with each other. Rakshit and Drishti works as a narrator of the story while Divya and Shekhar acts on it. In between the play during the break, Shekhar again comes at the outbuilding and tries to complete the work of his tunnel but Pishachini does a magic and that angle is still visible but is not accessible anymore.

Shekhar thinks someone blocked it with the use of magic and now he has to exit through the main door. Again comes back at the play area and the second part of the place started but this time Patali took the place of Divya. She successfully replaced Divya with herself by spiking her water. pishachini noticed that he is trying to escape from the house taking advantage of the darkness and he appeared at the drama area as gabbar to draw the attention of everybody about the absence of Shekhar.

Precap : Pishachini exposes morari in front of the whole family and feels out about his reality. Patali is causing harm to Divya and trying to save her sister.