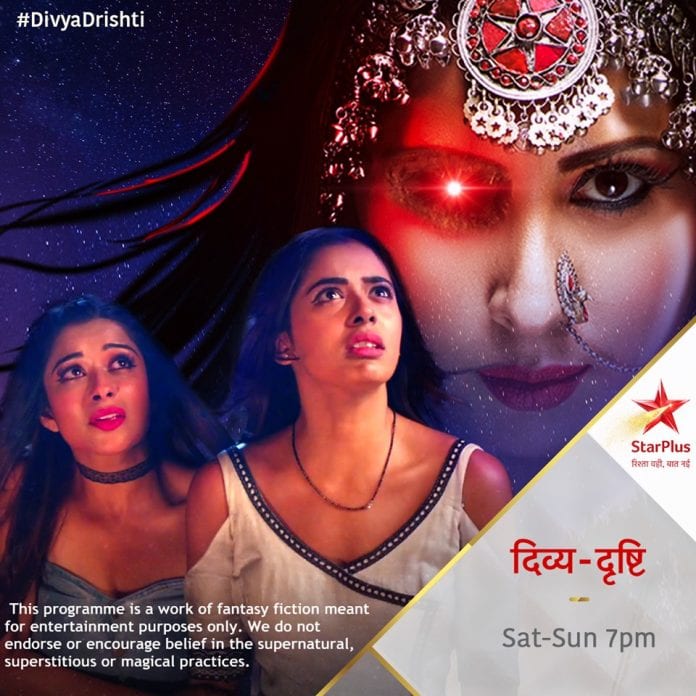 The episode starts with Lavanya distributing juice to everyone in the house. She asks Rakshit to have chosen as well. Divya says I can’t tolerate this drama of Lavanya of being a perfect daughter-in-law. Rakshith here gets worried for Drishti. Divya remembers that Drishti vision where everything is so green and someone is hurting another with a sword. She immediately asks everybody not to drink the juice specially Rakshit. She tells Rakshith that when Lavanya is making juice I was in the kitchen, she was preparing orange juice then how come orange juice can become green? Suddenly the family members start to doze off one after another. Divya says it must be a new game of Pisachini, she wants everybody to fall asleep so that she can do her work. We have to keep everyone in the family wake up.

Drishti is going to enter the house when Pisachini appears in front of her. Divya asks her what you did to me and my sister powers? Pisachini says I used to think both of you are much more intelligent. If you still don’t understand what I will do then …. It’s simple I want your powers and now both of you are powerless to change or see the future. She leaves from there and Drishti decides to bring Kal Vijay Ratna.
Lavanya thinks to pretend to sleep so that no one can doubt her. She asks Rakshit to drink juice bt Rakshit diverted it with an excuse. Romi brings a loudspeaker and horn and asks everyone to wake up and cheer for Lavanya and decides to play antakshari. Pisachini appears there and gets surprised to see all are singing. All starts to sing, when Pisachini is enjoying it. Divya makes everyone sing and then she takes Lavanya name. Lavanya asks why you are not letting them sleep? Divya says why you want them to get sleep? Pishachini murmurs dance and sings as much you want after all that is destined, that will happen.
P stops everything for a while and confronts Rakshit and tells him a lie about Drishti. She says she killed Drishti and Rakshit pretends like he doesn’t care. She left and Rakshit told Divya to take care of all and while he will go to search Drishti.

Rakshit comes to Shiv temple and asks for his help to find Drishti. He performs tandav and a light appeared behind the idol of Shiva and he gets a sword. He vows to save Drishti and bring her back fit and fine.

Divya is pacing in the room when Romi enters and give her a brief about all positions, she thanks him. Here Rakshit in disguise of Anjaan comes to the den and looking for Drishti. He is digging a wall when his mask falls off. He realized he is tricked by Pisachini and remember Drishti future visual about this. Rakshit leaves when Pishachini comes there and says today is the day of destruction.

Divya hears and sound and notices Lavanya in the corridor. She asks her how come she is here. Lavanya makes up a story and goes away from there. Rakshit informs Romi about Pishachini plan and tells everyone’s life is in danger. Drishti enters the room and sees everything is dark. She then gets an incomplete vision of Mahima attacking someone with a sword. She tells Divya about it but Divya stops her from saying this.

Rakshit listens to their talk and blames Drishti for being mean to his mother. He asks Drishti not to victimized his mom in all these for her revenge. Drishti says do you think I can stoop so low to demean your mother like that? She is not in her sense to do all this. Rakshit says it appears to be like that. Drishti blames him for doing more bad to her and stopping low to the extent of marrying Lavanya in spite of she being there. He never believes her and blames her everything. Drishti goes from there when Mahima follows her with Sword. Divya sees it and tries to stop her with her powers but it’s not working. Mahima wields the sword on Drishti and attacks her. Suddenly the thread got detached from Drishti hand and Divya uses her powers to stop Mahima. Drishti in the chaos sleeps from the balcony but Rakshit comes in the nick of time and saves her. Rakshit talks to Drishti and apologized to her for not paying attention to her vision. They both have a conversation where Rakshit tells her that how he gets to know he is Anjaan. The song plays in the background Tere Bin Jee Na paunga… Rakshit I got powers from my grandfather as Chiranjeevi uncle told me. I know Pisachini is your enemy and I was assigned to protect your sisters from her. Drishti asks him is his marriage with Lavanya is a fake affair? Rakshit says yes, you have doubts? Drishti asks him to say sorry, they have some good moments and hugs each other.

Lavanya asks Pisachini why she is silent. Pisachini informs the door of hell is opening did your Mahima killed anybody yet? Drishti here gets a vision of Mahima killing someone.

Precap : Lavanya orders Mahima to do her assigned work. She proceeds to attack the family.