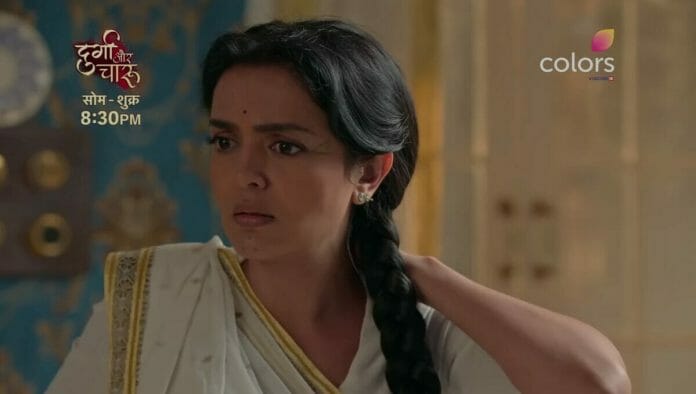 Now, Durga and Charu meets after 5 years and they gets close without knowing that they are sisters. Charu and Durga facing troubles due to Bholi so it will be interesting to watch that what going to happen in the future episode.

Earlier it’s seen that, Bholi found wire in Durga’s room and she understood she got current shock due to Durga. Next day, Binoy told Chumki to do Kali maa’s puja. Durga scared her by telling fake story. Chumki refused to perform puja so Durga performed it.

Bholi’s men kidnapped Chumki by mistake. Polash learnt about Bholi’s plan and he joined hands with her. He went with Durga to give ransom money to kidnappers. Kidnappers caught Durga.

In the upcoming episode, Chaturbhuj will make Polash unconscious and he will attack the kidnappers. Durga will also beat kidnappers. Chumki will lose her consciousness. Binoy and Sampurna will worry about girls. Police officer will bring the girls there. He will tell them that Durga saved Chumki and Polash lost his consciousness.

Doctor will treat Chumki and say that she is in trauma so she need rest. Bholi will wonder that how Durga attacked the kidnappers. Chaturbhuj will tell her that Durga claimed that Chumki told her about Baanke’s truth.

Later, Durga will tell Charu to win Bholi’s trust. Charu will get worried that Chumki may tell the truth to Bholi after regaining her consciousness.

Will Chumki tell about Chaturbhuj to Bholi? What Chaturbhuj will do to win Bholi’s trust?