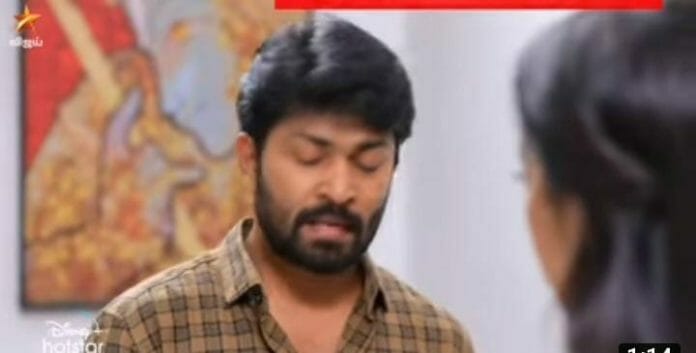 Eeramana Rojave 2 is famous Vijay’s show. Kavya and Jeeva’s love story takes a hit when destiny forces them to marry each other’s elder siblings. Now series focuses on Parthiban to spend a quality time with Kavya

In the previous episode we saw; Ramachandran got impressed by Parthiban’s project work. He will appreciate his hard-work. Rama chandran expressed his happiness with him. Parthiban helped Kavya to dry her hair. Parvathy made video call to Parthiban. She grew suspicious seeing a girl near him.

Parvathy doubt Kavya staying with him. Parthiban managed the situation there. The family was shocked to learn Aishu framed Jk. Aishu revealed to everyone that JK was innocent.

JK defended her when they scold her. JK demanded Jeeva to apologise to Devi. Jeeva turned down his demand. Later, Parthiban rejoiced as he realised Kavya’s love for him

In the upcoming episode viewers will see; Sakthi will request Jeeva to save her. She will reveal him that she accompanied her friend to attend the party but they are using young girls for prostitution.

Jeeva will reach there on time and help Sakthi to escape from there. Police will arrest him. Meanwhile, Priya will misunderstand Jeeva and slap him in anger. She will refuse to believe his confession. Priya will take him out in bail. Later, Parthiban will spend a quality time with Kavya

Will Kavya leave the house? When will Parthiban learn the truth?