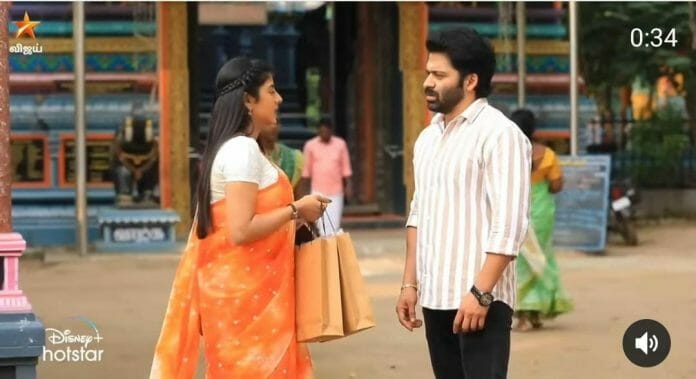 Eeramana Rojave 2 is famous Vijay’s show. Kavya and Jeeva’s love story takes a hit when destiny forces them to marry each other’s elder siblings. Now series focuses on Kavya will be in dilemma

In the previous episode we saw; Durai met Arunachalm and informed him about his election. He assured to support him.

Later, Kavya missed Parthiban and hallucinating him around her. She realised that she fell in love with him. She bought a shirt for him. Meanwhile, Devi informed to Arunachalm about her election. He said to her that he promised to support Durai. Devi challenged him to win against Durai.

Priya brought a shirt for Jeeva. Maha got happy to see her change. Kavya blaberedd to her that she brought wrong size to him. Priya thought that she doesn’t even know Jeeva’s size. Parthiban gave advertisement in the newspaper about their 100th day of marriage. Kavya lashed out at him in angry.

In the upcoming episode viewers will see; Kavya will demand Parthiban to meet her in the temple. Parthiban will dreamt like Kavya appreciating his suprise idea.

Later, Kavya will reach to the temple and pretends like scolding him for gave advertisement in the newspaper. Kavya will give the shirt to him. She will lie to him that she brought a wrong size for her dad. It will suit to him. Parthiban will caught her Red-handed that she brought it for Parthiban.