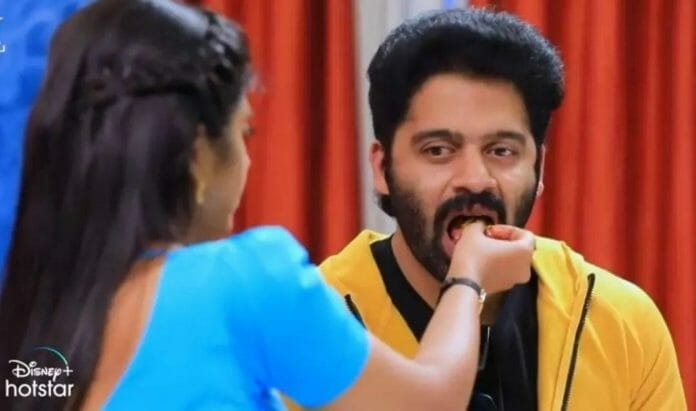 In the previous episode we saw; Parthiban disappointed with Parvathy’s decision and shared his grief to Jeeva. He added that who will celebrate Aadi maasam in these days? He said to Jeeva that he requested mom to don’t send Kavya from here but she didn’t heed to his plea.

Parthiban suggested him to meet their wives in their house secretly. Jeeva denied it. Parthiban shared to him that he was missing Kavya a lot. He wanted to meet her. Jeeva got surprised to see his love for Kavya. Later, Parthiban climbed the wall secretly to meet Kavya

In the upcoming episode viewers will see; Parthiban will ask Kavya to cook something for him. Later, Parvathy will learn from Jeeva that Parthiban isn’t in his room but went out.

She will inquire Parthiban whereabouts? He will tell her that his friend cooking dosa for him. Parvathy will call Kavya to know about Parthiban. She will blabbered the truth to Parvathy.