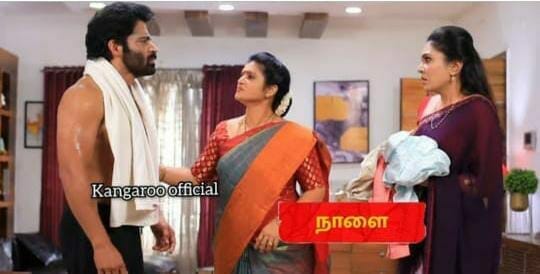 In the previous episode we saw; Priya lied to Jeeva that she brought the shirt for her dad but mom misunderstand she brought it for him. Jeeva assured her to wear it for her. Later, Kavya shared with Parthiban that she feel guilty to see him doing everything for her. Devi won the election. Parthiban shared the news to Arunachalm.

JK will insulted Arunachalm in front of his employees. Jeeva warned them and leaft from there. Meanwhile, Parthiban got furious seeing Ramya broke his wedding photo. Parvathy mistakenly spills coffee of Parthiban’s shirt which gifted by Kavya. Parthiban lashed out at Ramya for it. Parvathy regretted her deeds.

In the upcoming episode viewers will see; Parthiban will be upset after learn that Parvathy spilled coffee on his favourite shirt. He will share his grief with Kavya. Kavya will visit home and help him to remove the stain from his shirt. Parvathy will notice Kavya in home and lashes out at her for met Parthiban.

Will Kavya leave the house?

When will Parthiban learn the truth?