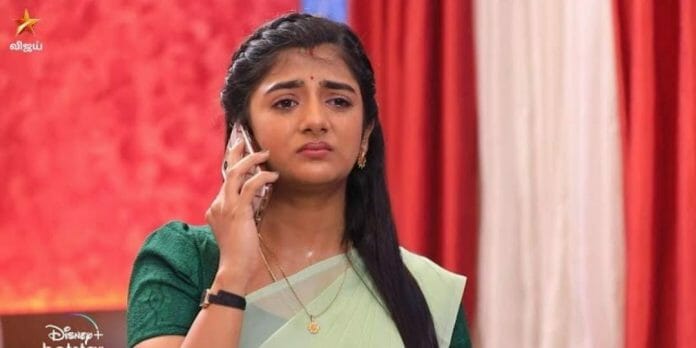 In the previous episode we saw; Kavya demanded Parthiban to meet her in the temple. Parthiban dreamt like Kavya appreciating his suprise idea. Later, Kavya reached to the temple and pretended to be scolding him for gave advertisement in the newspaper.

In the upcoming episode viewers will see; Parthiban will inform Parvathy and Jeeva that Kavya gifted this shirt to him. Parvathy will get angry hearing it. She will fear that Kavya will accept Parthiban and live with him.

Later, Swetha will inform Parthiban that Ramya ruined Kavya’s painting. Parthiban will confront Ramya for torturing him. He will warn her to stay away from him. Ramya will assure him to don’t disturb him again. Meanwhile, Parvathy will demand Kavya to give divorce to Parthiban.