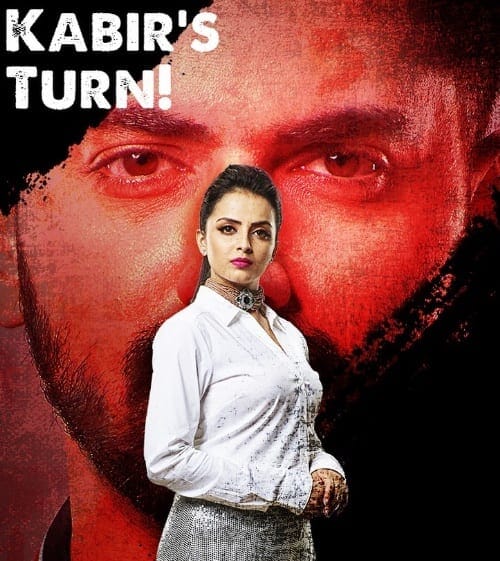 The episode starts with Kabit is about to sign the papers when Pooja comes and hold his hand. Jay gets scared of her and Kabir asks what are you doing Pooja? Pooja says signing the papers check it aur ask that on what papers he is taking your signature? Kabir says I will check it myself and to find out property papers is there with the official papers. Kabir asks Jay just tell me you didn’t do it intentionally. Rani gets happy to see her plan worked and the rift between the two brothers established. Jai tells Kabir that he just wants his shares of property which is his rightful demand. He says to Kabir that he is being blind for Pooja that he cannot see her intentions. Chanda also comes forward and says I just want my share of the property so that I can leave the house with my kids. Suman gets angry on Pooja and says on this are happening because of you, you are breaking my family. Pooja gets upset with her allegations while Kabir tries to explain the family people that they are taking it in all the wrong way but no one is ready to pay heed to him.

Later on, some goons of the counselor arrive at their house and forcefully try to take along with them because he gets the name of the daughter of the counselor to show the College principal due to which she also gets rusticated from the college and the now is blacklisted by other colleges. Kabir and Pooja come out of the house and sees the whole scenario, Kabir went to save Jai and beats the men ruthlessly. When one of the men comes forward with a knife and is about to stab Jai when Pooja comes in between. She holds the knife and the goons left the house.

Kabir tends the wound of Pooja and asks what do you think of yourself? Are you thinking yourself to be some superwoman? Pooja says I have no other options left as they are about to stab Jai but I have to save him as his life is more important than mine. Jai is listening to their talks and entered the room and tears the legal papers and asks for an apology from Kabir and his sister in law Pooja. Pooja says she will consider herself lucky if they decide to believe in her now. She assures Jai that she wants him to progress in life and for that, she talked to some people for his admission in college.

Chanda comes to Suman to request her to accept Pooja as the daughter in law of the house. She is changed for good and she should give Pooja a chance. Suman is angry still on Pooja. Kabir tries to make Suman agree and confess that he and Pooja are in love with each other now. Suman gets shocked when Chanda again requests her to consider her thinking for the sake of Kabir as he loves Pooja so much. Suman says if you all are okay with Pooja then fine but I can’t stay with this girl anymore. Hence I will leave the house now, Pooja says to Suman that I will leave the house and you don’t need to go.

Kabir is shocked with the decision of Pooja and asks his mother to stop her. He is feeling helpless with the situation whereas Pooja is packing her bags to leave the house. kabir tries to stop her but she says I have no other options left. Kabir shouts at her and says you can go but I will not do as per your command.

Precap – Rani conspires against Pooja and tries to kill her.