Kabir suspect Dhruv’s hand behind Pooja’s kidnapping and accuses him. Suman asks Kabir to stop blaming his own brother for Pooja. The duo has an argument. Otherwise, Rani blames Kabir behind Pooja’s abduction.

Kabir decides to search Pooja and finds Dhruv’s hand behind the mess. Otherside, Pooja frees herself and Dhruv runs behind her to catch her. Kabir too runs behind Dhruv to save Pooja.

Now in the upcoming episode, will see Kabir will end up protecting Pooja from Dhruv.

Dhruv will hold iron bar and will walk toward Pooja, Kabir will see this and will run to save Pooja. Here, Pooja will faint after Kabir thwarts Dhruv’s deadly attempt to attack her. Later, Suman will berate Kabir for supporting Pooja and will create a scene at her office.

Do Kabir will be able to explain to Suman behind his act? Do animosities will grow between Dhruv and Kabir? Do Pooja will have a change of heart towards Kabir?

What Dhruv will do next? Is this is a start of Dhruv and Pooja’s love story or their will be twist in a tale? To know more keep watching the show mon-fri on Star Plus at 7 PM.

What next happens in Ek Bhram- Sarvagun Sampanna will be interesting to watch.

For all the latest updates, spoilers, news and written updates, keep visiting this space! 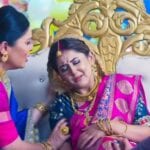 March 3, 2021
Pandian Stores 3rd March 2021 Written Update on TellyExpress.com Today the episode begins with Moorthy decides to get a loan by mortgaging his home. The...

March 3, 2021
Bharathi kannamma 3rd March 2021 Written Update on TellyExpress.com The episode starts with Soundarya thinking about the incident. She reminds Kannamma's word how did she... 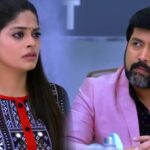 March 3, 2021
Nam Iruvar Namak Iruvar 3rd March 2021 Written Update on TellyExpress.com The episode starts with Mayan is praying to his father and losts in his...