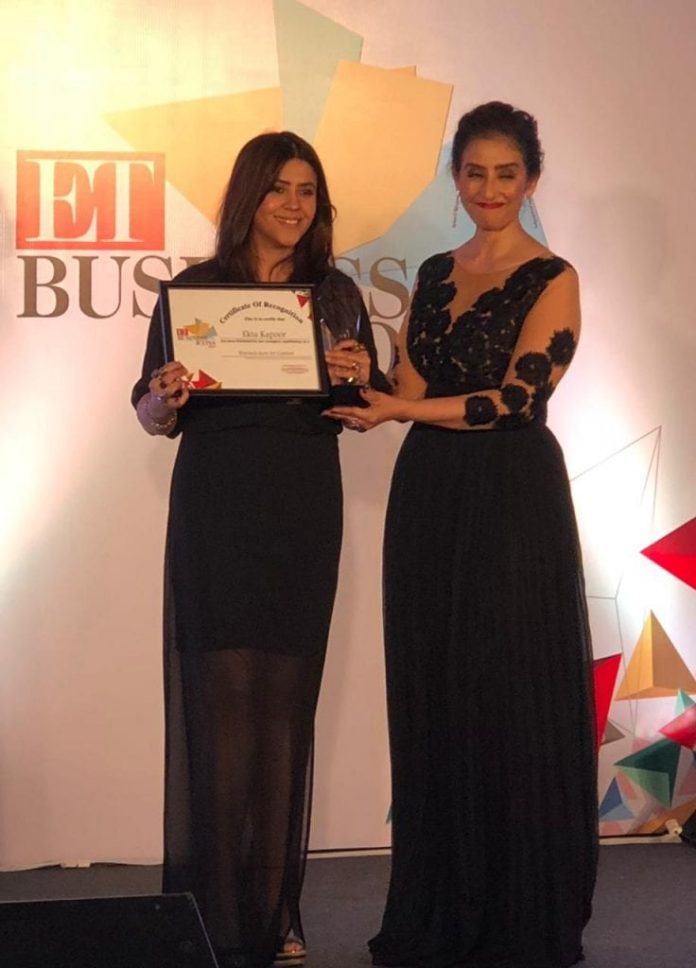 Ekta Kapoor bags the title of ‘Content Creator of the Year’ at ET awards
Queen of Indian television and entrepreneur Ekta Kapoor added yet another feather to her already overflowing hat at the Economic Times Business Icon of the Year Awards where she was felicitated with the title of Content Creator of the Year.
The filmmaker posted a picture from the event with the award and wrote, “Pic a lil blur but Thanku @the_economic_times for the business icon for content award !”
In 2018, Ekta Kapoor managed to be an integral part of the development of multiple mediums – from television to films and digital world.
On television, she rebooted one of her hit tv show Kasautii Zindagii Ki for the younger generation, as well as renewed Naagin for season 3.
Ekta was also the producer for much talked about Veere Di Wedding, a movie driven by a women while speaking about topics that are otherwise considered taboo.
Recently Google India released its top trending list for last year, and we came across an interesting fact about Ekta Kapoor. When searched for Content Czarina, the search engine showcases Ekta Kapoor’s name touting her as the Queen of Indian content.
Ekta Kapoor’a platform for web series Alt Balaji created waves by giving hits and hits. Kapoor’s love for going all out in terms of variety has continued onto her newer ventures. Alt Balaji became home to many different genres of shows, from family dramas like Home and Hum, to erotics like XXX:Uncensored or Gandii Baat.
The Content Czarina of India has established herself as one of the most powerful ladies in the industry as well as in the country. She received the Icon of Excellence at the Forbes Tycoons of Tomorrow award in 2018 amongst others.
The pioneer of daily soap entertainment, Ekta Kapoor solely changed the face of Indian TV. After conquering TV, the content czarina is leaving impressive imprints on the cine-goers and the digital audience.
Breaking stereotypes in the entertainment world, Ekta Kapoor carved a niche for her own, creating new content for the audience. Content Czarina Ekta has very well known the pulse of her viewers and delivered the best content suiting their needs time and again.