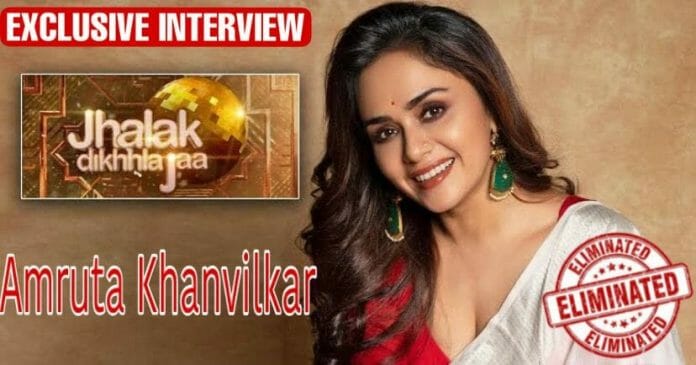 Amruta Khanvilkar is disappointed that her Jhalak Dikhhla Jaa journey ended so fast, ” Overall, it was a fun ride with me getting full marks and Madhuri ( Dixit) mam compliments. I idolized mam. She inspires my dance; performing in front of her was a massive thing.”
But she accepted that not being a tv star harmed her “I always knew that I was not as famous as Niti Taylor and Rubina Dilaik, not having done much TV.” said she

“But yes, when it came to dancing, I felt I had an upper hand,

Check out the full interview here:

In reality shows, audience preferences come into play, and Indians are diehard support of their superstars; no wonder they are so big.” added she

“I also did appeal for votes, but I wonder why I got few votes anyways. I accepted their verdict with folded hands.
Who do you think will go on to win?,” Gashmeer Mahajani is excellent on his feet and hugely popular courtesy of his show Imlie.“

Among all her performances, she regarded Dola Re Dola Choli Ki Peeech and voguing, in heels, as her best.
Amruta, who had won Nach Baliye before, is not interested in Bigg Boss; hubby Himanshu Malhotra does not like it. I jokingly tell people to first get me his affidavit before approaching me.

Looking ahead, she has two web series “ one is a Bhopal shot Hotstar series, and the second is an Applause product platform that is still undecided.”