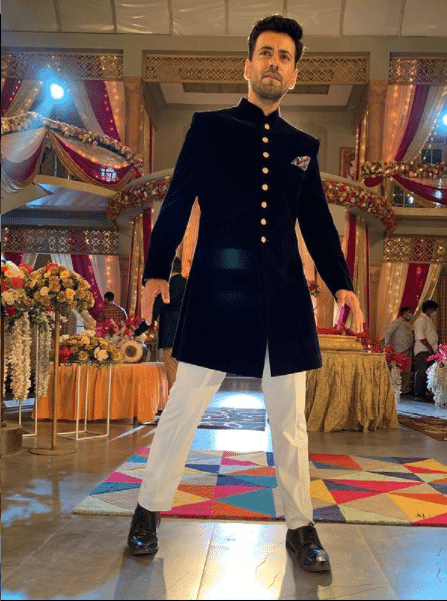 Talented Karanvir Shamra who earned huge fanbase with his stint in the show ‘Shaurya Aur Anokhi Ki Kahani’ in an exclusive talk with us share about his journey in the show. How Karanvir and Shaurya shares a similarity and how the show happened to him. Sharma also talked about his bonding with his co-star Debattama Saha, and revealed what personally he felt about the actress when he first met her. Check out the IV below!

When you were approached for the show for the first time, what was your reaction to it? What thoughts were in your mind?

When I was approached for the show then every thing was in a rush. I was In a hurry, the makers were in a hurry since they wanted to go on to the floors the next day. The makers also wanted to cast Shaurya first and then his entire family so that they look like his family, so that they look related. The casting directors were very particular about it. I knew while signing that it is an adaptation of a Bengali show or rather I would say inspired by it. So I gained a lot of confidence from there as that show also is doing very well. At the very beginning I was very scared to do this character because Shaurya as such is a very misogynistic character, who doesn’t respect women and it was mainly so because of the upbringing Shaurya has had. In earlier times I used to get a lot of hate mails, people did not like my character. But today if I see it, then it is a mixed bag of emotions for me.

When you got this show, did you ever think that Shaurya would receive such magnitude of love and attachment from the audience?

No, I did not expect that as such but I was sure that the kind of unusual love story that we are trying to tell will definitely receive the kind of love that it should and it eventually did. So that confidence was there. I never think about a character that it will receive this amount of love as it will hamper my process of working as an artist.

How Karanvir feels playing Shaurya and also getting appreciated every time in the trending section whenever Shaurya does something good?

Yes, it definitely feels good when people start appreciating your work, your performance and to bring that up to the trending section it takes a lot of effort from the audience’s side as well, so it good to see that. I always feel blessed that there are such attached fans of the show.

Do Shaurya and Karanvir share any similarity and how different are these two from each other?

Well in that aspect everything that is portrayed by Shaurya, every emotion be it anger, be it sad or be it being in love, all of it comes out somewhere from Karanvir only. I generally get very attached to my character and also start behaving like it in a certain way. Till the time I do not give my 100% into the shot I am not convinced by it and keep on requesting the director for some more takes. The loving part of Shaurya, the caring one, the fun one, is similar to me. I am generally like that in my real life but I am not that serious in my life as is portrayed by Shaurya. I am also a man of my words just like him. I never do anything bad to people neither do I let anything happen to my closed ones.

How is your bond with your co-actors, specially Debattama as you regularly post reels and stills with her so what would you like to say about that?

Well, my bond with all the co-actors is very good and specially Debattama. She is a very talented and a pure hearted Soul. She is a very black and white kind of a person. We will continue posting reels and everything together so that people do stay in touch with us and our fandom remains same. We also have a lot of fun on the set. We enjoy together, sometimes we enjoy so much that it starts irritating the other actors and we are then told to get serious about the work. As TV artists we do not get a lot of time for our breaks so we try to have as much fun as we can. Khalid, Alka ma’am, Harsh are some of the others with whom I share a very dear bond.

What was your reaction when you first met Debattama?

When I saw her for the first time, I thought she is perfect for the role of Anokhi. The character of Anokhi requires a little spark and Debattama has that in her. She is a very talented actress as well, she tries to give her best in every scene. Second time I met her during the reading sessions. She was wearing a Hustler mask and that she is in her real life as well. She is a hustler. In her interviews she has told about me that I am a very arrogant person, I don’t talk to people. Well, I am not arrogant, I am a reserved person. I don’t open up to people that much till I know you.

Describe SHAKHI in one word?

I can only one thing and that for me is called PURE. You can call it PURE LOVE, PURE EMOTIONS, PURE FEELINGS. Its just everything PURE. Nothing else. The audience has given us a lot through their love and that is all we wanted.

What was your reaction when you heard that SAAKK is going off air?

Well, I cried a lot to be honest. I was into it everyday, I was going through all my messages for the updates. But I am relieved in a sense that there is no question about my performance or the other actor’s performances. I tried my best. I gave my 100% to every shot and every scene and that is the only thing I could control and all the other things were not in my control. I am happy that people now cannot say that he wasn’t good and must say that he is better than he was yesterday.

Can fans expect another season of the show?

What is the one thing that you are missing the most about the show?

Actually, I am missing the routine the most. Getting up everyday, being ready for the work, it’s a nice feeling always. For a film or a AD it’s a different scenario as you get a lot of rest time of number of days at once. So it’s the vibe of the set that I am missing the most right now.
Rumour is ringing that you have been approached to play a pivotal role in a movie, and it is opposite Yami Gautam, any comments on the same?

Yes, the rumours are doing the rounds lately. I cannot dwelve much into the movie or the character as it can only be revealed during the official announcement of the movie. I can share this much that it is a role of a Lawyer who gets trapped into some kind of a crime scene, along with other actors as well. Yami too is trapped with us. So its going to be a nice film. It is going to release on OTT platform and the duration is said to be kept under two hours.

Have you become selective in choosing the work you want to do or you wish to try out everything?

No, I don’t want to do everything that comes my way. I know my USP. I know what I am good at. I can anyday do a love story, an intense love story, I also wish to do thrillers or roles such as that of a split personality like Badlapur and how John Played in Jism. Those type of roles I wish to play but for your answer, NO, I don’t want to try out everything. My main preference is always a love story. I did play a role of a cricketer Manoj Prabhakar in Movie Azhar which I did not relate to that much but make up and prosthetics helped me a lot in it.

Which platform do you prefer the most: TV or Movies?

I prefer facing the camera the most. Whether I do TV, a Movie, something for the reels that I make since that is the trend today, or anything for Youtube, or even the interview that I am doing with you, I enjoy everything as I have to face the camera. I am more of a person who believes in giving the work his 100% be it any work, be it a movie, be it a TV show, a web series anything.

Last but not the least; message for your fans!

I would like to wish them all the best for their lives, wherever they are, whatever they are doing. Also I wish to thank them from the bottom of my heart for showering us with their love throughout the running of the show. I would like to request them to keep loving us, keep supporting us like this in future as well.

Follow us for more news, spoilers and latest TV updates