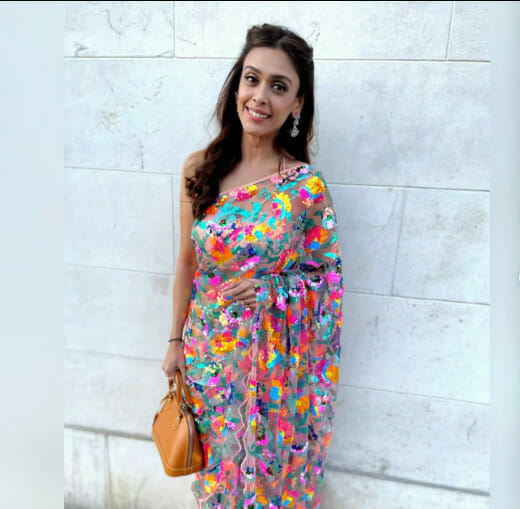 By Anil Merani: The talented and beautiful Hrishitaa Bhatt is basking in the success of her latest Akshay Kumar OTT film Cutputli.” It feels great to be a part of a hit film. I had previously worked with the producer Vashu Bhagnani( Out of Control). Given theatrical business’s uncertainty, he smartly dropped it online, leading to an increase in viewership. “

Hrishitaa has no qualms about playing Akshay’s Kumar on-screen sister ” Today times have changed; you dont have to play only young leads; characters matter, not age. And here, the kidnapping of my character’s daughter led to a turning point in Akshay’s journey in the film, so it was a pivotal role”, added she

“It was a sensitive mother’s role. Although I have not experienced this feeling, the writing was good because I did not find it challenging, and I always like to take risks in my career.”

“Also, it was good to see a change in my character at the end, when she goes from a crying mother to someone seeking justice. says she
Hrishitaa recently went to the Venice festival as part of the steering committee’s upcoming IFFI( International Film Festival of India) festival.” It was a matter of great pride to represent your country.. India is now ready to accept different kinds of cinema from home and abroad. “

Hrishitaa had done both commercial( Ashoka) and off-beat cinema.( Jigyasa)” Some of my films might have been ahead of their time, so they are fresh even Today.”

She is also part of an upcoming web series celebrating the unknown heroes of independence,” where I played Rani Laxmibai.”

In closing, Hrishitaa was unclear whether she would go bold on OTT; “it all depends on the character. “