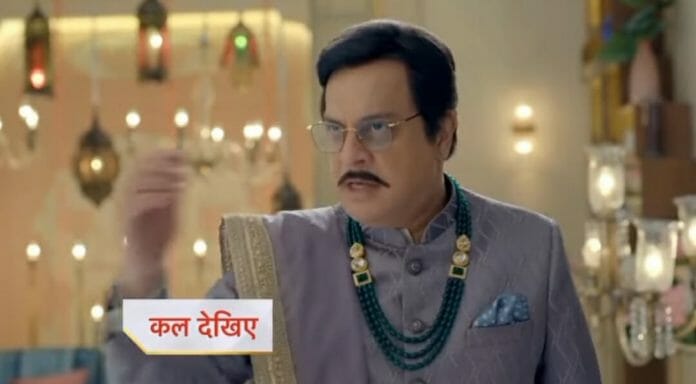 Star Plus newly launched daily soap “Faltu” is unravelling lot many dramas with each passing day. The show is making the viewers curious, with its unpredictable storyline. Previously, Ayaan entered Faltu’s house to rescue her.

Whereas, Kanika got furious learning about Ayaan’s move and lashed out at Janardan. Sumitra and Sid took advantage of the oppertunity and instigated Kanika against Ayaan. Meanwhile, Charan supported Ayaan’s decision and asked Faltu to run away with him.

In the current track, Ayaan and Faltu tries to go to the airport while they sees Pappi and his goons. They tries to escape them and then gets inside the car. Ayaan remembers his engagement and becomes worried about reaching on time.

Here, Ayaan searches for his phone but realises that he left it in the airport. He then sends Faltu to change her bridal clothes and took her to the airport. Whereas, Ratan and his wife finds about Faltu’s missing.

Ratan’s wife and Charan to tell about Faltu’s whereabouts while the latter denies and proclaims that his daughter is safe and he can do anything for her. Jamana also gets elated finding about it.

Ahead, Ratan’s wife was about to beat his other daughters but Jamana protects her daughters and scolds the latter. Meanwhile, Pappi finds about Faltu and follows the latter till the airport. The security doesn’t allow him to get inside.

Ayaan and Faltu gets inside the flight and reaches his city. Whereas, Kanika lashes out at Janardan, while the latter shows his trust upon Ayaan. He also takes a shocking decision stating that he will give all the property to Sid if Ayaan doesn’t came on time for engagement.

Later, Sid and Sumitra celebrates their victory while Ayaan tells Faltu about his engagement and she gets shocked. He states that he have to send her to the hotel before reaching on time for his engagement.

Now in the upcoming episode, Janardan will tell Savita that if Ayaan doesn’t reaches on time for his engagement and he have to get ashamed by Kanika because of him, then he will accept that Ayaan isn’t his own blood. He will proclaim that he will throw Ayaan out of his life while Savita gets worried.

Meanwhile, the can driver will tell his friends that Faltu has come to the city for the first time and states that she must have money. She will get suspicious about him, while he tries to snatch her bag but she will push him run away from there. They will follow her while she runs on the road trying to save herself.

Will Faltu be able to save herself?

Will Ayaan and Tanisha gets engaged?