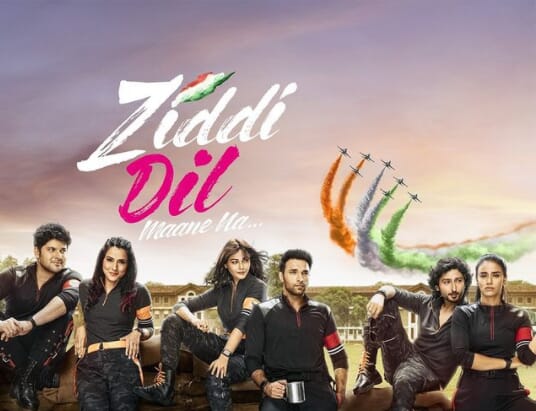 Like we quoted above ‘Ziddi Dil Maane Na’ is being compared with ‘Left Right Left’, talking about the same fans told us that since show is set on military backdrop thus, comparison is obvious. Few also quoted that they are yet to watch ‘Left Right Left’; Check out

“Left right left & ZiddiDiIl Maane na both are shows based on army background. So comparison will be done.”- says@chittu_chitra12

“Honestly I haven’t watched left tight left but just know that it’s also military background. The comparison is obvious. However I like the freshness in concept among the regular love triangle and kitchen politics that 90 percent of the shows offer now”; wrote fan @soundariyuvaraj.

While, @AmiiFathima and @mery_taiana told us that they are yet to watch ‘Left Right Left’.

“Many People say it’s inspired by Left right left and I am yet to watch That show”,- @AmiiFathima

Giving the best reason fan revealed the show is breathing fresh as it doesn’t have any typical saas-bahu conspiracy. Also the cast of the show is the catchy element too.

“Usually I love arrogant male leads, Karan Shergill  is one among them and this is my first show which is revolving around an Army Backdrop, So the show is kinda different from Typical Saas Bahu Sagas” –@AmiiFathima quoted.

According to @chittu_chitra12; The Casting of the show is very well. The characters written up is beautiful & actors portraying it are doing full justice.

3. Youth based shows are getting hype but no TRP, do you think Ziddi Dil Maane Na has a potential to break the ice?

Talking about the same fan @soundariyuvaraj explained “Honestly, the answer is may be. Itv audience love dramas over any youth concept. In case, the show takes any dramatic turn the audience may give it a chance. I think it already has few elements which can add drama to the show. Like a kid hiding in academy, Dramatic behaviour of leads, etc. So yeah the scope is high”.

4. Promo of the shows are catchy but when show go on air it is losing its plot, is that the case in ‘Ziddi Dil Maane Na’ too?

“So far the series is showing what they have promised to show, I just hope it will not lose its the plot in future as well”- wrote @mery_taiana

As per @AmiiFathima: “These shows are solely depending on trp viewers, they are habituated watching Same clinch dramas hence itv serves what ppl ask for ,in that case Ziddi Dil is classy and stylish yet it has few typical elements too, Anytime it can be turned as fully as an archetypal show”

“The show Ziddi Dil Maane naa is a show which can be watched by all ages in the family. It does not have a kitchen politics like in saas bahu sagas”- @chittu_chitra12

5. Your favorite character so far and why?

‘Karan Shergill’ aka Shaleen Malhotra’s character is impressing the large sets of audience!

“My favorite character is Karan Shergill because I am an hardcore fan of talented Shaleen Malhotra”.- @mery_taiana

“Karan, Monami and Sanjana are my favourite characters till now. Karan and Sanjana have a tough outlook but are soft from inside. On the other hand there’s Monami who’s very soft both outside and inside but still trues to groom herself to become strong. All three have their own set of problems but they are still fighting to overcome it”.- @soundariyuvaraj

“My favourite character is Karan Shergill. Karan is a strict yet have a soft side. He is passionate about his country”.- @chittu_chitra12

“My most favourite character in the show is Karan Obviously , apart from him I like Faizi Bala and Sanju too”– @AmiiFathima

6. Lastly, Rate ‘Ziddi Dil Manne Na’ out of 5 with a proper reason

Giving 3.5 star fan @soundariyuvaraj quoted the reason. “I would rate it a 3.5 for the concept and the acting. The only drawback is some hard to believe stuffs like a kid hiding in such a secure academy, Sid acting all childish in an operating theater and yeah no Captain’s wife can take decision to throw a party in academy as its not their private property.”

So [@soundariyuvaraj, @AmiiFathima, @mery_taiana and @chittu_chitra12 ] are our top fans who got featured in our article this week. Thank you so much for the interaction.