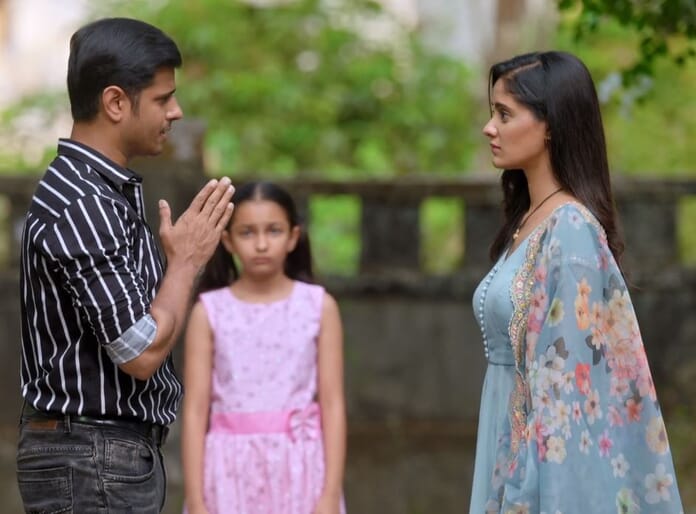 The episode begins with Karishma bringing things for Omkar in his room, Ninad and Bhawani says that he made it a habit , Bhawani says that he is angry when his anger will go he will join them. Sai and Virat says comes down for food. Everyone is happy to see her, everyone wants to sit next to her. Sai says that she wants to say something that she is fine and wants to go to college, she tells to Bhawani that she wants to buy scooty Virat says yes you can tathat’s bai keeps on taunting Virat and everyone is noticing that she is misbehaving with him.

Samrat also scold her, karishma sees this and goes to call Omkar and Sonali. Pakhi taunts Virat that his stomach is full with Sai taunt. Shivani says that she wants to start her tarro card reading, Virat says that she can start it online. Sai again taunts Virat, Omkar and Sonali says that everone can see how Sai is insulting Virat it’s good decision that they are leaving the house. Ashwini ask Virat why he is not telling anything to Sai, Virat says that have you ever tell others not to misbehave with me. He tells that he is her son so he will also same like her.

Virat takes stand for Ashwini and tells to Chavans that no body ever seen Ashwini contribution to this house. He says that all these happened just because Ninad didn’t gave any importance to Ashwini, he says that he always insulted or ignored Ashwini. Shivani, Sai and Mohit says that they were acting they cannot insult Virat. Ashwini says to Virat and Sai that they did this for her. Sai says that they didn’t involved her in this as she wouldn’t support them. Shivani ask Ninad that what will he say in this, he says that what he will say they blamed him for everything. Omkar says that this will happen as they have put Sai on their head. Sai justifies them but Bhawani says why all of a sudden they wanted to teach Ninad a lesson.

Bhawani says that if Ninad is not saying anything he is having some reason behind that. Bhawani says that Ashwini never said against their behaviour. Virat says that why his father listen to Bhawani than Ashwini. She says that if something is happening in this from long time, it always have reason behind, she ask Virat to ask others about it. Ashwini says to Bhawani that Virat can see what’s happening in this house. Ninad stops him, Virat says that today nobody will stop her from saying. Sai says that nobody must be knowing that tomorrow is Ninad and Ashwini anniversary. Chavans says that nobody knows about their wedding.

Pakhi says that Sai is magician that she can see things and taunts her, Samrat stops her and says that Virat and Sai even become more respectful in his eyes. Ninad says that he is supporting Sai and now she is going against him. Sai tells him that she loves that he has accepted him as a Bahu but with this he cannot disrespect his wife, Sai says that she have learnt everything in life very hard. Ninad tells them that there is no relation left between him and Ashwini he doesn’t even wants to remember his wedding date.

Precap- Ashwini says that no need to celebrate as there is nothing left in their relationship. Virat gets angry and says that does he exist, he questions them why did they bought him in this world. Ninad says that he loves him very much, to which Virat says then let him and Sai celebrate their anniversary.