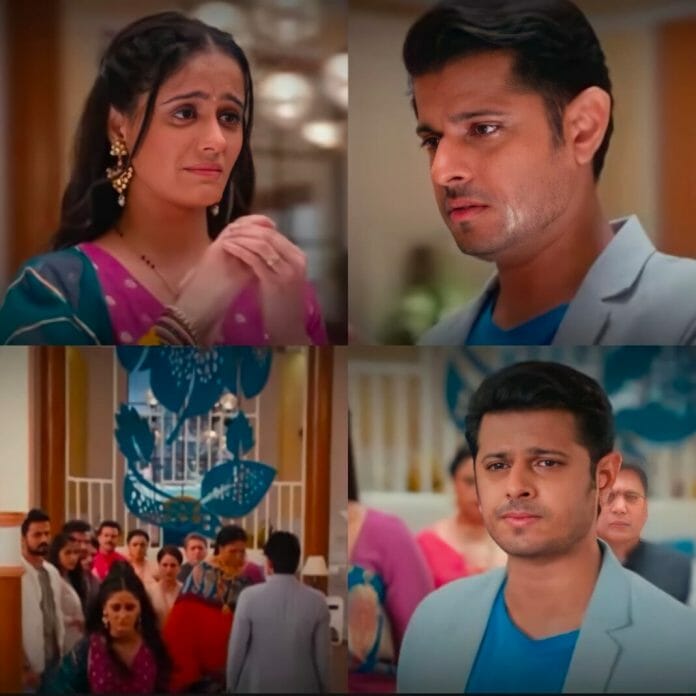 Episode starts with Sai confronting Pakhi about throwing the medicines into dustbin. She complains to Bhavani about it, while the latter questions Pakhi and demands for an answer. The latter glares at Sai and declares that she is frustrated with her. She proclaims that the latter keeps ordering her and prohibiting her from doing several things. She becomes emotional and complains about Sai’s restrictions towards her. Sai takes a stand for herself and says that she have all the rights to look after her baby.

Here, Sai tells that she keeps an eye on Pakhi all the time because she doesn’t take care of herself. Pakhi replies that Sai used to give her several medicines which caused heartburn in her body. She proclaims that she never denies to take the medicine, but as the burn continues, she throws the medicine into dustbin for the first time.

Pakhi shouts that Sai create drama for every small thing, to which the latter declares that she won’t be careless towards her baby. Bhavani scolds Sai and says that she have done wrong by giving all the responsibilities of Pakhi towards her. She tells that Sai is forcing Pakhi to follow her instructions.

Elsewhere, Sai bring a blank paper along with a pen and ask Pakhi to give her a written statement. Sai ak Pakhi to write that she will look after the baby and will deliever a healthy baby. She also insists to write that Pakhi will give the baby to Sai after delivering it, while the latter denies to do any such thing.

Sai scolds Pakhi for not following her instructions or accepting her demand. She also shouts at her to stop crying stating that it isn’t such a huge matter. Chavans gets shocked hearing Sai’s demand, while Bhavani rebukes Sai. Mansi shows her support towards Pakhi stating that she suggested her to move on in her life, but still she chooses to help Sai and Virat.

Ahead, Sai gives a befitting reply to Mansi and ask if she can’t see her problems. She proclaims that there isn’t anything wrong in giving a written statement, while Rajiv along with Ashwini and Ninad shows his support towards Sai. They says that it won’t change anything and ask Pakhi to do as per Sai’s saying.

Bhavani tells that Virat’s parents are being biased towards Sai and declares that only she will take the final decision. She goes towards Sia and snatches the paper to tear it, but Pakhi stops her. She tells Sai to take everyone’s signature before her and then only she will also sign. She acts to be innocent and questions of the latter doesn’t trust her? Sai ask not to make her reveal about Pakhi’s deeds.

Further, Karishma manipulates Sai against Pakhi and tells that she is right about her demand. She says that many surrogate mothers causes trouble to the real parents after giving birth. Sonali smirks seeing her daughter-in-law’s ploy and starts manipulating Pakhi against Sai and fakes her support towards her, just to enjoy the drama. Meanwhile, Sai declares to being an unbiased person to take a decision for them. She goes to bring the person, while Chavans waits to see him.

Precap:- Sai brings the food for Pakhi and shouts her name. Whereas, Ashwini also searches for Pakhi but couldn’t able to find her. At that time Karishma and Sonali also comes there and tells that the latter isn’t anywhere inside the house. Ashwini gets worried that where Pakhi can go? To which Karishma questions that if she had run away with the baby? Everyone gets shocked, while Sai falls on the sofa being dumbstruck.