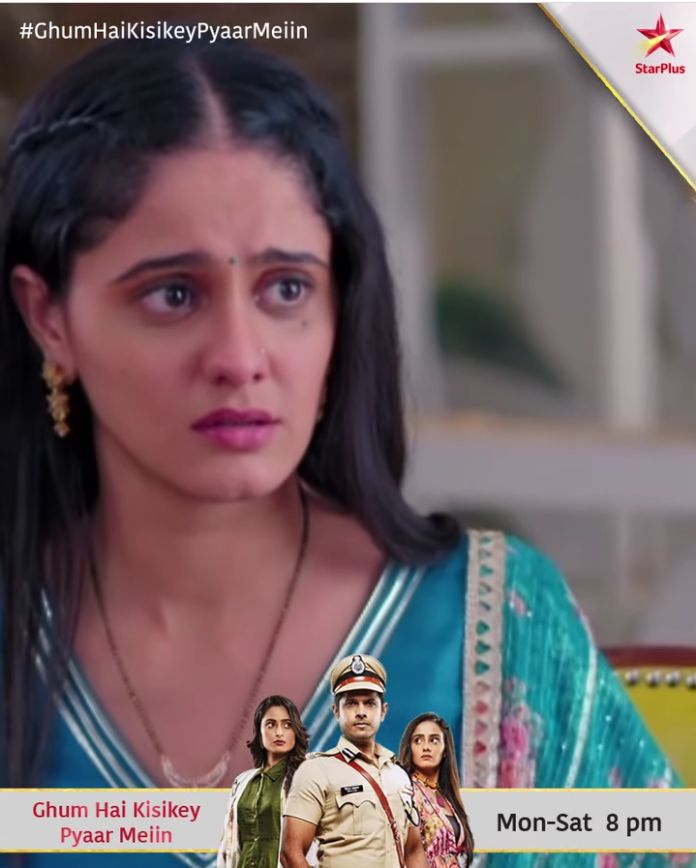 Episode starts with a six months of leap. Chavans celebrates baby shower and Virat along with Shivani brings Sai to the swing and makes her sit. The latter holds her baby bump and winces in pain, while Virat looks after her. They adores her and says that she is glowing. At that time Bhavani and Sonali also comes there along with Pakhi. The latter questions them about the matter, to which Sai replies that they all are preparing for her baby shower. Pakhi gets irked seeing them and holds her baby bump, while Bhavani says that soon they will be blessed with a baby boy.

Here, Sai looks at her bump and removes the pillow from her dress, which she kept to make it look like a bump. She says that she just wanted to feel the experience of baby bumb, while Virat recalls the moment when Sai was having symptoms of being pregnant. Shivani also says that she was so sure that Sai will be pregnant, while Bhavani also agrees to them. Sai feels sad and proclaims that she also got a hope and that’s why took the test.

Elsewhere, Pakhi taunts Sai while the latter confronts her asking that why is she feeling jealous of her. Meanwhile, Bhavani and Sonali makes Pakhi sit on the swing and starts preparing for her baby shower. Whereas, Virat takes Sai inside their room and gives a surprise to her. Meanwhile, Bhavani and Sonali also takes Pakhi inside her room and starts making her ready.

Bhavani praises Pakhi after getting her ready and says that she is shinning. Whereas, Virat also gets Sai ready and becomes romantic with her. He picks her up in his arms and both gets close to one another, while at that time Ashwini comes inside their room and closes her eyes seeing their romance. Virta drops Sai down, while Ashwini laughs seeing their reaction.

Ahead, Ashwini praises Sai for glowing and compliments her. They goes out while Pakhi along with Bhavani also comes downstairs. Everyone gathers around them to celebrate the baby shower, while the ladies praises Sai for her beauty. Pakhi gets irked hearing their compliments for Sai, while Devyani comes there and compares Pakhi with Sai and tells that the latter is looking more beautiful.

Sai stops Devyani from comparing and says that it isn’t right as the guests are hearing them. She then praises Devyani and then Chavans starts the baby shower ceremony. Sai shows her excitement to become a mother, while she clicks pictures with Virat. They also opens the gifts and Sai gets emotional seeing them. Whereas, Pakhi feels jealous and keeps staring at Sai and Virat.

Further, Vaishali ask Pakhi to accept the truth that Sai won’t let her touch the baby. Whereas, Sonali proclaims tht the baby is lucky to have two mother, but Sai clearifies that only she is the mother of the baby. Meanwhile, they plays fun games by guessing the gender of the child. At that time Pakhi whispers into Sai’s ears that she won’t let Sai have the baby and declares that Virat will himself hand over the baby to her. Whereas, Sai gets shocked hearing Pakhi’s plan.

Precap:- Pakhi cries in pain holding her baby bumb and calls Virat. She ask him about his whereabouts and says that she is about to give birth to the baby. She ask him to come to her immediately and states that no one is there with her. Whereas, Virat assures her and says that he is coming there. He motivates her to stay strong and tells that even Sai must be reaching there. Pakhi drops the phone being in pain and sits down, while a man comes there and Pakhi gets shocked seeing him.

Episode starts with Ashwini and Virat telling Chavans about Sai’s symptoms while Bhavani predicts the latter to be pregnant. Everyone becomes shocked yet excited and prays for Sai to give them a good news. Pakhi becomes anxious and thinks that it cannot be possible, orelse her plan will get flopped. At that time Sai comes there and gets confused seeing everyone looking towards her. She questions them about the matter, while Bhavani tells her prediction to Sai stating that she might be pregnant. Sai gets stunned and reminds them about her medical reports that she cannot conceive.

Here, Sonali also tells that the doctor have already informed them that Sai cannot be a mother and even if she conceives, the baby won’t be able to survive in her womb. Bhavani stays positive and declares that she have seen several women’s getting pregnant, who have complications.

Ashwini also gets happy and agrees to Bhavani. She says that doctors aren’t always right and Sai could have been pregnant. Sai also gets excited but ask Chavans not to keep their hopes high. Bhavani convinces Sai to take a pregnancy test and the latter agrees. She proclaims that she will take a test inside the hospital.