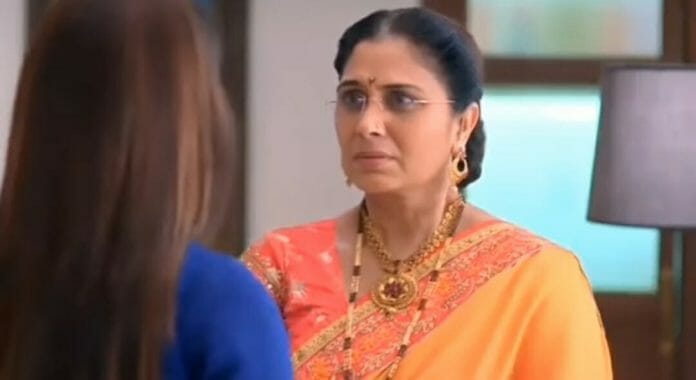 Star Plus show Ghum Hai Kisi key Pyaar Meiin is one of the most loved shows on Indian television. Right from the time of its inception, the show has been entertaining the masses. Previously, Virat assured Pakhi that he will never leave her. Sai argued with Jagtap but he took Savi along with him forcefully in order to cheer her up. Whereas, Chavans gets shocked finding about Sai being alive and blamed her for all the misery they went through.

In the current track, Ashwini breaks down and accuses Sai for all the sufferings of Virat. She proclaims that the latter could have informed them about being alive, instead of letting them mourn in pain. She decide not to forgive her and then goes to check on Pakhi. Whereas, Bhavani decides to remove Savi and Sai from their life.

Here, Bhavani forcefully snatches Vinayak’s phone and tries to delete Savi’s number but he denies to give her the password to open his phone. She takes it downstairs, while Vinayak follows her. Meanwhile, Ashwini shows her concern towards Pakhi and proclaims that Sai can never come in between Virat and her.

Ashwini gives gift to Pakhi while the latter tries to calm her. She tries to explain that Sai just helped them, but Ashwini prohibits her from taking her name. At that time they hears the sound and goes downstairs. They gets shocked as Vinayak falls down the stairs, while they admit him to the hospital.

Ahead, the doctor says that his condition is critical and ask to call his previous doctor. Vinayak also request Virat to call Sai, while Pakhi holds his hand and signals him to do it. She also assures him that their son will get fine, while he also becomes emotional.

Jagtap takes Savi out and cheers her up. He also tells that her father will soon come back and then drops her back to home. Usha gets happy seeing her Savi fine, while Sai lashes out at him and prohibits to interfere in their matter. Jagtap also scolds her for giving pain to Savi and ask to re-think about her decision.

Later, Bhavani blames Sai for Vinayak’s condition while Virat accuses her for it. He along with Pakhi gets worried for Vinayak. Whereas, Jagtap cries feeling bad for Savi and Sai, while his friend consoles him.

Now in the upcoming episode, Pakhi will ask Virat to choose a necklace for her, while at that time Sai will also come there to sell her ring. Virat will notice her and intentionally makes Pakhi wear a necklace announcing about their marriage anniversary.

Sai will look at them and then goes away keeping her ring stating that it doesn’t have any value left. Pakhi will also notice Sai and picks her ring. She will look at it and then at the latter.

Will Sai notify Savi about her father?