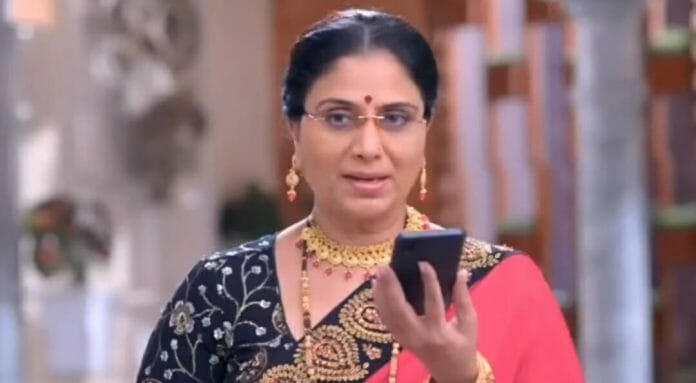 Star Plus’s top rated show “Ghum Hai Kise key Pyaar Meiin” has been entertaining the audiences with its exciting twists and plots. Previously, Sai took Savi along with her and warned Chavans not to follow them. Whereas, Virat got heart broken and decided to confront Sai regarding the custody of Savi. He invaded inside Sai’s house and apologised for his mistake.

He tried to convince her to share Savi’s custody but the latter denied. Virat threatened to reveal the truth to Savi while Sai tried to stop him. He then decided to hide the truth from the kid and took a promise from Sai that she won’t separate his daughter from him.

In the current track, Sai feels bad for Pakhi and ask Virat to discuss the matter with his wife before taking any decision. She tells Usha that she can feel Pakhi’s pain while the latter states that she also have to understand about the importance of Savi in Virat’s life. Whereas, Sai tells that the time is again repeating itself.

Here, Vinayak notify Chavans about Virat adopting Savi. He gets excited to welcome her in their house while Bhavani gets furious by the decision. At that time Virat and Pakhi comes there, while the latter confirms about the information.

Bhavani lashes out at Virat and denies to accept his decision. She says that Savi is not Virat’s child while he gets angry at her and proclaims that Savi will always be his daughter, whereas Bhavani asks for proof.

Ahead, Bhavani calls Virat heartless as he doesn’t consider Pakhi’s emotions before taking the decision. She ask Pakhi to tell about her feelings to Virat, while he confronts her and ask if she has any problem with his decision?

Pakhi lies to Virat and tells that she is happy for him. Bhavani gets disappointed with Pakhi and says that she will suffer because of her decision. Meanwhile, Pakhi tries to talk to Virat about her worry and says that Sai will visit their house often because of Savi. He misunderstood her and scolds that she wants to separate him from his daughter.

Later, Pakhi tries to clarify her intentions and gets into an argument with him. Whereas, Ashwini comes there and tells Virat that she wants to invite Savi for a ritual. She calls Sai and ask her permission to send Savi to their house, while the latter agrees happily.

Now in the upcoming episode, Sai will come to the Chavans house along with Savi, while Ashwini performs a ritual and ask the latter to come inside the house. Savi will dip her legs into the thali and walks on the white clothe. She will about to fall when Sai run towards her to save her daughter but mistakenly walks on the same clothe leaving her footprints. Savi will show it to everyone and says that Sai is also a part of their family, to which the latter denies and says that it was a mistake. Pakhi will agree to Sai and assures that she will rub the footprints away. She will start cleaning the prints while Chavans feels bad for her. Sai will also feel hurt seeing Pakhi, while Virat will get confused by her behavior.

Will Sai and Virat gets close to one another due to Savi?