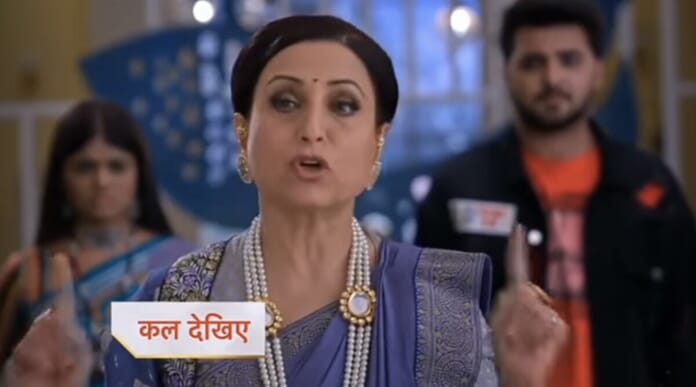 Ghum Hai Kisi key Pyaar Meiin is presently ruling television screens. The show is doing extremely well. The storyline of the serial is focusing on Virat’s complicated life, in which he got stuck in between Sai and Shruti. His family throws him out of the house due to some misunderstandings, while Sai accuses him for having an extra marital affair with Shruti. Will he be able to solve the problems or will he have to face more difficulties?

In the earlier episode, Virat scolds Karishma for character assassinating Shruti. Whereas, Sonali takes stand for her daughter-in-law against Virat. Meanwhile, Bhavani stops Virat from leaving the house and ask to think about his decision. She tells that how people will mock about their reputation, to which Virat replies that he doesn’t care about it anymore.

Here, Virat reminds that it was their decision not to trust him and ask to go away from the house. He remembers Ninad’s accusations, while Ashwini talks about his betrayal towards Sai.

Pakhi stops Virat from leaving, while Samrat questions Virat that where he will stay? Virat ask Samrat not to show his fake concern, while latter ask Virat to appreciate Sai for not complaining against him. He warns that her complain can even snatch Virat’s duty, to which latter says he doesn’t care about anything.

Ahead, Virat bends to take elders blessings before leaving, but they denies to bless him. Ninad once again insults him, while only Mansi shows her support towards Virat stating that there must be some reason for his behaviour.

Virat leaves the house, while his family members gets heart broken. Devyani gets concerned afor Virat and Sai, while Virat goes to see Shruti where doctor advice him to shift her to an advanced hospital.

Later, Pakhi worries about herself after Virat’s departure. Meanwhile, Bhavani along with Ashwini and Sonali attends the Puja of their neighbours and gets insulted by them. They questions about Sai and Virat’s divorce, while Ashwini takes stand for her daughter-in-law.

Now in the upcoming episode, Bhavani will get frustrated and declares that she don’t want to talk to anyone. She will climb the stairs to go to her room, when Sonali mocks her for pouring her anger out on them. Suddenly, Bhavani will slip from the stairs and hits her head. Meanwhile, the nurse will take Shruti for the test, whereas Virat stays with the baby inside the hospital. Sonali will get shocked seeing him playing with the baby.

Will Bhavani gets saved?
Will Virat’s truth comes out?
Will Shruti enters Chavan’s mansion?