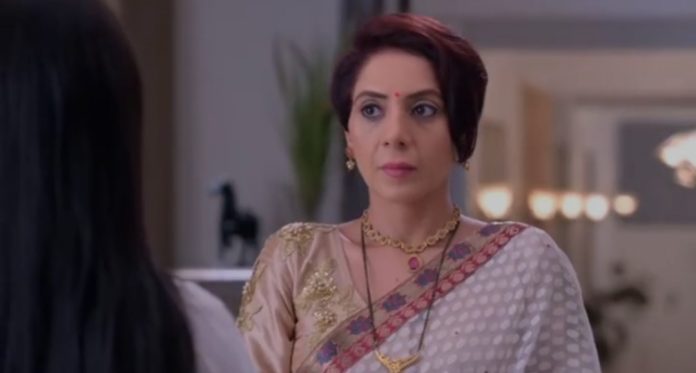 Star Plus popular daily soap Ghum Hai Kise Key Pyaar Meiin is all set to serve the audiences with a high voltage drama, along with the ongoing plot. Previously, Sai took a promise from Pakhi and prohibited her from interfering in her life. Whereas, Virat tried to justify Pakhi’s intentions in front of Sai, but the latter denied to trust her. Meanwhile, Virat and Sai gets excited to become parents.

In the current track, Pakhi eavesdrop to hear Sai and Geeta’s conversation. She decides to meet the latter and stop her from becoming Virat’s surrogate. She proclaims that only she can give birth to Virat’s child and in return will get his affection and care. She determines to get Virat back in her life and ploys against Sai.

Here, Virat and Sai expresses their excitement to welcome their child. They both gives assurance to one another and determines to stay positive. Virat shows his love towards Sai and states that she always erase his problems.

Sai gets emotional seeing her father’s potrait, while on the other side Ashwini tries to console Bhavani. She reminds the latter about the time when Virat was borned and states that she also have look after Virat’s child. Bhavani tells about her concern and declares that Pakhi would have been perfect to become their surrogate.

Ahead, Ashwini insists Bhavani to move on and becomes emotional hearing her words. Whereas, Chavans gets excited to welcome Sai and Virat’s child and expresses their happiness. Where, Pakhi makes an excuse to visit to the temple and goes out of the house. Whereas, Bhavani gets concerned for her.

Pakhi fools Bhavani with her fake concern, whereas Vaishali tries to stop the latter, but gets helpless and agrees to stay with Pakhi to support her plan. Meanwhile, Bhavani also insists to visit the doctor along with Sai and Virat. She questions the doctor about the danger they can face in surrogacy, while the latter replies that there is nothing to worry about.

Later, the doctor ask Sai to call Geeta on time orelse they won’t be able to perform the procedure. Sai calls Geeta and the latter assures her to reach on time. But at that time Pakhi disguises herself and visits Geeta’s house in order to stop her. She lies that she came from the hospital, while Geeta looks at her being confused.

In the upcoming episode, Pakhi will show the terms and conditions of surrogacy to Geeta and Yogesh, while the latter gets shocked seeing that Geeta can even go to jail. He will become furious stating that Sai has hided such a big thing from them. He will declare that Geeta won’t become their surrogate, but the latter tries to calm him. She will say that she trusts Sai and insists to talk to her, but Yogendra will stay firm on his decision and will stop Geeta from even contacting Sai.

Will Geeta be able to become Sai’s surrogate?