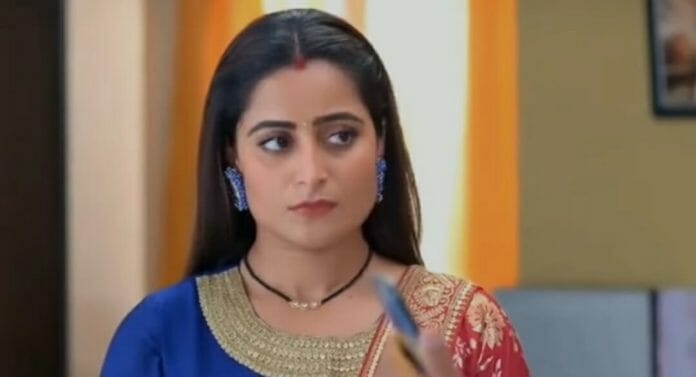 Star Plus popular daily soap Ghum Hai Kise key Pyaar Meiin is unravelling lot many dramas with each passing day. The show is making the viewers curious, with its unpredictable storyline. Previously, Pakhi confronted Sai and asked about her relationship with Jagtap and Savi. The latter denied to answer Pakhi and mocked about Virat and her marriage. Usha insisted the latter to tell the truth to Virat, but Sai didn’t agreed. Whereas, Chavans got relieved after finding about Virat being out of danger.

In the current track, Virat forced Sai and accused her of having a relationship with Jagtap. The latter gets furious at him and storms out of his room, after treating his wounds. She suffer emotional pain and breaks down inside her room recalling about Virat and Pakhi’s marriage.

Here, Sai imagines her father and blames him for all the problems. She states that he shouldn’t have given her hands to Virat for marriage, as he was already in love with Pakhi. She states that she came in between their love.

Kamal makes Sai understand that everything happens for a reason. He ask if she is affected by Virat and Pakhi’s marriage, to which she lies and replies negatively. She says that she has moved on in her life and doesn’t want Virat to come back.

Ahead, Kamal assures Sai and ask her to accept the truth. Meanwhile, Savi gets concerned for her mother after seeing her hand bleeding, while Usha goes to tell the truth to Virat but stopped after seeing him with Pakhi and Vinayak.

Virat decides to leave Kankauli, while Pakhi and Mohit tries to stop him but gets unsuccessful. Meanwhile, Chavans talks to him and wishes Pakhi for her birthday. Virat apologizes to her for forgetting it, while she assures him.

Later, Sai tells Usha that Virat and Pakhi has already moved on in their relationship and ask her not to tell about Savi to them. Usha leaves from there while Sai feels hurt seeing Pakhi and Virat. She hides from them and then goes away, while Pakhi spots her.

Now in the upcoming episode, Sai will give rose to Savi as the latter loves it, while Savi will get elated and hugs her mother. She will then gives it to Vinayak stating that he is her best friend, while he will also get happy and thanks her. He will then give it to Virat and ask to give it to Pakhi as it is her birthday?

To which Virat will get confused, while at that time Pakhi will come there and sees the rose in his hand. Vinayak will hide behind the chair and will smile looking at his parents.

Will Chavans find about Sai?

Will Sai agrees to Pakhi’s request?