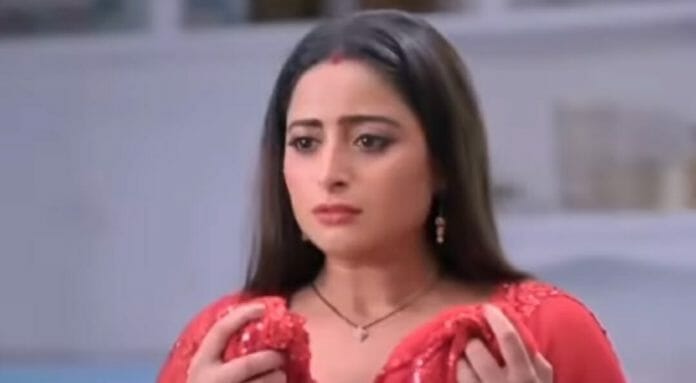 Star Plus’s top rated show “Ghum Hai Kise key Pyaar Meiin” has been entertaining the audiences with its exciting twists and plots. Previously, Virat got Sai arrested when the latter tried to invade inside Chavans house in order to take Savi back.

Meanwhile, Pakhi became shocked by Virat’s changed behavior and got worried about their relationship. Whereas, Bhavani pointed finger at Sai’s character but Virat took a stand for the latter.

In the current track, Virat gets worried about Savi’s health. He becomes concerned as she suffers from fever. He looks after her along with Vinayak while the latter wakes up and ask about her mother. Virat tries to divert her mind and engages her in different topics. Whereas, she becomes elated learning that she will stay with Virat and shares her excitement with Vinayak.

Here, Pakhi gets tensed seeing Virat forgetting about everything in Savi’s presence. Whereas, Vinayak ask her to cook something for the latter. She goes inside the kitchen and keep thinking about Virat’s words.

Pakhi recalls Virat’s decision and gets flashes of him separating Savi from Sai. Her dupatta catches fire while Ashwini comes there and saves her life. The latter gets shocked and scolds Pakhi for being careless.

Ahead, Pakhi cries sharing her pain to Ashwini while the latter consoles her. Pakhi gives the food to Vinayak while he questions about her burnt dupatta. He also surprises Savi by making her dream tent along with Virat, while Pakhi feels uninvolved.

Sai determines to get out of the police station. She keeps shouting while the police officer calls Virat and tells him about it. He permits to give cell phone to Sai and states that she can make one call. Whereas, Usha comes to visit Sai.

Later, Virat calls the doctor and gets Savi checked. He informs that Savi is suffering from heat stroke. Whereas, Virat recalls her helping Vinayak with race and states that from there she got fever. Meanwhile, Pakhi confronts Virat and he decides to tell the truth to Savi about their relationship.

Now in the upcoming episode, Sai will try to run away from the police station. She will get the gun kept of the table and points at the police officers asking them to stay back. Whereas, Savi will question Virat about her mother and cries asking that why she haven’t talked to her. Pakhi and Ashwini will also get emotional hearing Savi’s request but Virat stays silent. Meanwhile, Sai will run out of the police station and determines to meet Savi.

Will Sai be able to reach Chavans house?

Will Pakhi and Virat gets distant?