Star Plus’s popular show Ghum Hain Kisike Pyaar mein is topping the TRP charts. With Sai back to Chavan mansion, Virat and Ashwini feel like thier power is back. Virat is not ready to let Sai go now.

Here, Pakhi is feeling left out and alone seeing her love, Virat spending quality time with Sai. To add on the feeling, Bhavani’s attitude has started changing not towards Sai but towards Devyaani.

This change in Bhavani’s attitude is because of Sai. Pakhi feels like her say in the house is going. It is highly suspected that Pakhi will soon take some harsh steps against Sai in order to bring her suppy systems, Virat and Bhavani to her side. It will be interesting to watch if Virat and Sai can sustain the future challenges together?

In the current track, Virat calls Pulkit and family. Devyaani and Bhavani hug. Sai does aarti of Harini. Harini feels happy to meet all. Harini says why isn’t Devyaani normal like you, I don’t like her.

Ashwini tries to gift her what she brought to change the topic. Sai also gifts Harini a ganesh idol. Harini learns how she and Sai both love Ganesh ji. Virat asks everyone to sit and the play starts.

Harini identifies Sai as herself the fairy and Devyaani played by Pakhi as the fairy mother. Sai and Pakhi show how Devyaani suffered all those years without Harini. Here, Bhavani gets emotional. Then Virat says will Harini accept Devyaani?

Harini runs and hugs Devyaani. Everyone becomea happy. Bhavani, Harini and Devyaani’s pics are also clicked. Pulkit thanks Virat and Sai to make it possible. Sai praises Mohit for his direction for the play too.

When the birthday party ends, Bhavani says to Virat that she did everything he asked her to do and now she is going. Virat hugs Sai and thanks her. Pakhi looks on upset. Virat and Sai take pictures with Hairini.

Then everyone goes for vake cutting but Pakhi is upset and goes out. Virat goes to see what happened. Here, Sai is finding Virat and asks people here and there about Virat. Pakhi tells Virat how he broke his promise to her and gave her place to Sai.

Pakhi says we loved each other from past and couldn’t marry but we made a promise why did you break that. Sai comes there ans Virat is shocked to see Sai there. Virat tries to explain Sai but Sai tells Pakhi she can take care of Virat.

Virat will try to explain Sai but will be unable to as they go for Harini’s cake cutting ceremony. Harini and Devyaani are happy with each other and seeing that Virat and Sai become happy. Virat thinks to tell Sai about his feeling but Ashwini comes there and Sai says she is upset from Virat as he is not bringing Harini’s gift.

Virat also pretends everything is okay and goes. Ashwini is relieved that Virat and Sai are not fighting. They take a family picture but Sai is not present in it. Chavans come back and Sonali thinks someone here should also have kids, Pakhi can’t as Samrat is not here.

Bhavani says Mohit can’t as he is not earning. Karishma says so Sai and Virat. Pakhi feels angry. Bhavani taunts Sai that she will get confused if her child is going to school or she herself.

Sai and Virat go to room where Sai is angry. Sai says you should complete your promise given to Pakhi. Sai says maybe Samrat also left thats why. Virat feels angry so he goes out.

Pakhi hears this and thinks to console Virat. She takes turmeric milk. Virat asks her to stay away from their matter. Pakhi still insists him on drinking milk. He drinks. 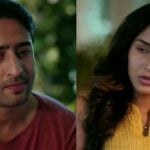