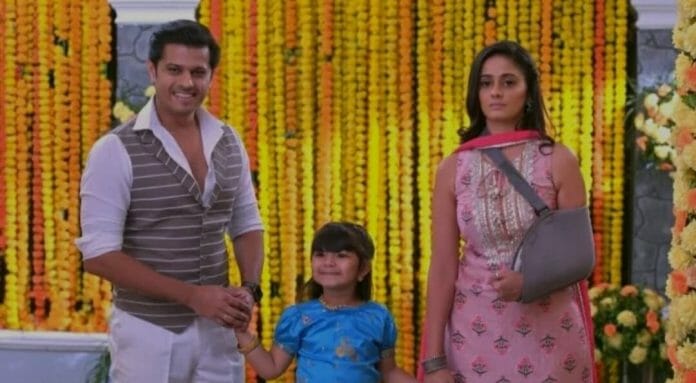 Ashwini and Ninad showered her with love and pampers her. Whereas, Virat unintentionally ignored Vinayak while looking after Savi. Pakhi felt bad for her and Vinayak’s state but stayed silent in front of others.

In the current track, Sai exposes Bhavani’s intentions while the latter makes allegations on her. She denies to accept Savi as Virat’s daughter while the latter lashes out at her and tries to hurt himself in order to give pain to Bhavani. Chavans tries to stop him while he takes a promise from Bhavani and she assures that she won’t doubt Savi anymore.

Here, Virat also ask Bhavani to apologize to Sai but the latter denies and goes inside her room. She also gives a warning to Virat that he will ruin all his relationship because of Savi.

Ashwini made Savi and Sai eat along with them while the latter insists her mother to sit in front of Virat. She proclaims that her family is complete and ask them to eat from the same plate.

Ahead, Sai and Virat recalls their happy moments from the past. Pakhi feels bad seeing their close moments but hides her pain. Meanwhile, Chavans showers Savi with expensive and gifts but Sai stops her from taking it.

Virat taunts Sai and says that she can allow Jagtap to give gifts to Savi but won’t let her accept it from her family. Savi takes all the gifts, while Sai becomes shocked seeing Virat’s gift. She talks to him and scolds for planning for Savi’s education without her consent.

Later, Sai challenges Virat and the latter accepts it and postpones the interview date. Meanwhile, Ashwini gives gift to Sai while Pakhi gets hurt and leaves from there. Sai denies to take the gift whereas Ashwini apologises for her behavior.

Will Savi be able to clarify the interview?

Will Virat get furious at Pakhi?