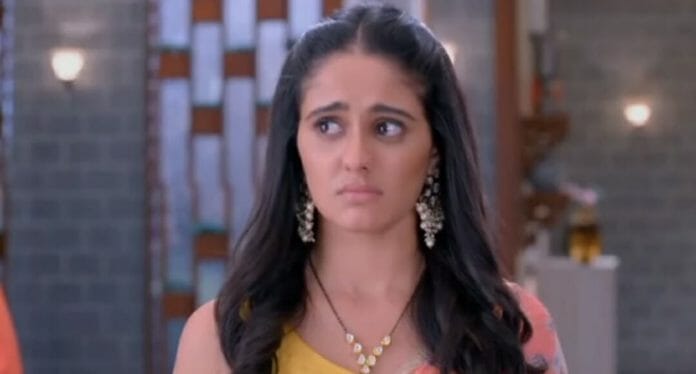 Star Plus popular daily soap, Ghum Hai Kise Key Pyaar Meiin have managed to rise curiosity in the minds of people, with its twist and turns in the storyline. Previously, Sai and Virat decided to opt for surrogacy to welcome their child. Whereas, Pakhi decided to take advantage of the situation and planned to become their surrogate. She told her decision to Bhavani, while the latter supported Pakhi.

In the current track, Bhavani notify Chavans about her decision to accept Pakhi as Sai and Virat’s surrogate. She proclaims that they won’t find anyone better then her, while everyone gets shocked; But, Sai and Virat denies her decision. Sai glares at Pakhi and feels negative vibes from her. Whereas, Mansi also gets against it and rebukes Bhavani for her decision.

Here, Bhavani clearifies that it was Pakhi’s decision to become the surrogate and proclaims that she haven’t forced her. She ask Karishma and Saloni to tell the truth, while Pakhi herself apprises that she wants to help her family.

Mansi goes against Pakhi and tells her that she can’t spoil her life. Mansi and Bhavani gets into an argument, while Pakhi tries to stop them. Saloni and Omkar shows their support towards Pakhi, but Sai confronts the latter and questions about her plan.

Ahead, Ashwini also supports Sai and doubts Pakhi’s intentions. The latter fakes her act and cries in front of everyone. She declares that they don’t trust her and always doubt her. She proclaims that she feels hurt and fools Bhavani with her act.

Virat takes a stand for Sia and shouts at Pakhi and Bhavani to stop. He declares that only Sai will decide whom she wants to select to become their child’s surrogate. He becomes furious at Pakhi and scolds her for taking advantage of his vulnerability.

Later, Pakhi tells that her intentions are not wrong and declares that she just want to help them. Bhavani takes a stand for Pakhi and proclaims that only she will become the surrogate and tells that her decision won’t get changed. She goes from there along with Pakhi, while the latter determines to fulfill her goal.

Now in the upcoming episode, Pakhi will tell Vaishali that she won’t stop until she will become the surrogate of Sai and Virat’s child. She will declare that no one can stop her from achieving her goal, while Ashwini tells Sai and Virat that Bhavani is blindly trusting Pakhi. She will say that Bhavani isn’t ready to hear them and thinks that Pakhi will be the best surrogate.

She will show her concern, while Sai declares that she can’t let Pakhi carry her child, as she was Virat’s ex-lover. Virat and Ashwini will get shocked hearing her statement. Whereas, Pakhi will proclaim that Virat’s concern be towards her after she becomes his surrogate, she determines to get Virat back in her life.

Will Sai be able to expose Pakhi’s intentions?