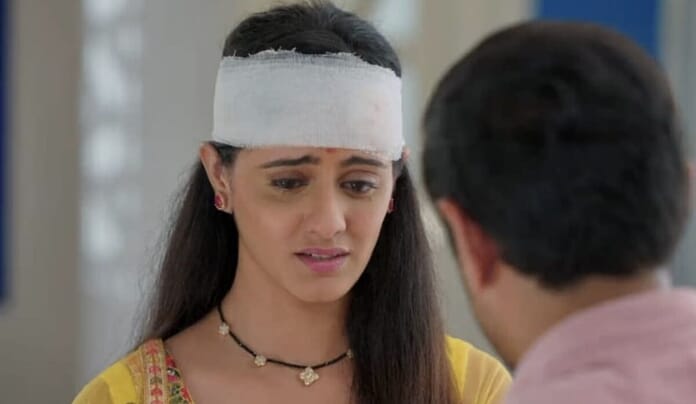 Star Plus’ show Ghum Hain Kisike Pyaar mein is seeing a major change post Sai’s accident. Bhavani and Ninad are shown concerned for Sai. Whereas Pakhi thinks she is done staying in Chavan house as she destroyed her own life by agreeing to marry Samrat. Sai who was not thinking much about Chavans, is now taking care of their interests.
Viewers are hoping for a confession soon. There are many expectations from the show kept by the viewers. But with Sai getting injured because of Virat’s jealousy, the bond of Sai and Virat might see a big change. What miracle will save this?

In the current track, Mansi gives Pakhi prasad as it’s her and Samrat’s marriage anniversary. Pakhi says Samrat will not return now as it has been very long time. The attention shifts to Sai and Virat when they come. Bhavani welcomes them with aarti thaal.
Sai gets overwhelmed seeing Bhavani do all this. Chavans know about Sai going to live in Pulkit’s house. Bhavani and Ninand say no to Sai as they want Sai and Virat to sort their issues. Sai and Virat go to their room. Virat helps her pack.

Sai could see Virat crying so she asks Virat. Virat makes excuse. When Sai is about to leave the room, Virat requests her not to go and says sorry. Virat says he can’t live without her. Sai stops him and says she won’t go anywhere. They hug. Virat kisses her forehead. Pakhi hears all this and gets angry that Virat has moved on.

In the upcoming episodes, Virat will ask Sai to accompany him for a vacation in the mountains. Sai will say that she will think and let him know.

Will Sai come to Chavan Nivas? Will Virat and Sai confess to each other? Will Virat be able to stop Sai?