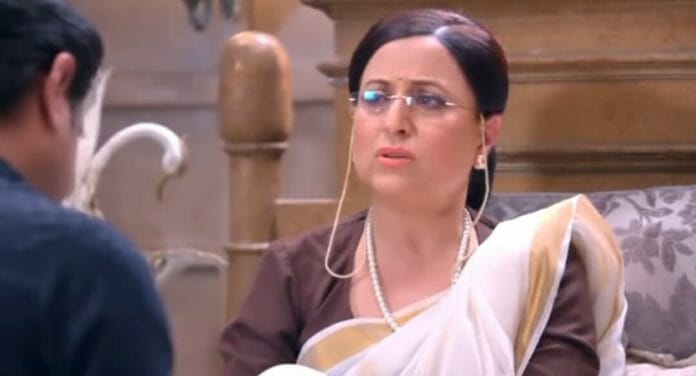 Star Plus popular daily soap Ghum Hai Kise Key Pyaar Meiin have garnered a huge amount of audience. The gripping storyline filled with twist and turns makes it engaging to the viewers. Previously, Virat decided to get Savi and Vinayak’s admission in the same school, while Sai got furious at him for taking a decision without her consent. She gave him an open challenge while he accepted it. Whereas, Pakhi got hurted seeing Ashwini and Ninad’s care towards Sai.

In the current track, Savi gets elated seeing all her gifts given by Chavans. Sai prohibits her daughter to take the gifts, stating that they all are expensive. Virat speaks against her and taunts that she let’s Jagtap give gifts to Savi, but is stopping her family to pamper her.

Here, Virat plays with Savi and Vinayak while Ashwini apologises to Sai for her mistake and insists the latter to take the gift from her. Sai denies and says that Ashwini’s words hurted her. Ashwini tries to console the latter but gets unsuccessful.

Sai and Ashwini gets emotional while Virat comes there. Sai goes out of the Chavans house along with Savi and then complains to Usha about Virat’s decision. She says that the latter is trying to prove that she can’t do anything for her daughter.

Ahead, Sai proclaims that she will show Virat that she have trained her daughter to face the world. Whereas, Karishma tells that Pakhi haven’t finished her food. Virat gets concerned for her and goes inside their room.

Pakhi suffers from pain and tries to calm herself. Virat apologises to her for his mistake and also shows his gratitude towards her for paying attention towards Vinayak. He explains his feelings and insists her to understand him. He also tells about his decision to get admission of Vinayak and Savi at the same school, but Pakhi doesn’t agree for it and becomes worried for Vinayak.

Later, Virat ignores Pakhi’s concern and stays firm in his decision. Whereas, Ashwini shares her tension with Ninad, while he proclaims that he will do anything to get both the kids admission in the same school. Meanwhile, Virat talks with Bhavani and tells her about his decision. She shows her concern towards him but proclaims that his decision will bring more problems in their house.

Now in the upcoming episode, Pakhi will meet Sai in the cafe and apologises to her for calling in urgency. She will remind Savi that Virat is trying to send Vinayak to same school as of Savi and proclaims that she have problem with that. Sai will state that she tried to talk to Virat but he isn’t ready to listen to her.

Pakhi will state that she can’t let her son get sandwiched in between them, while Sai ask that what she can do? To which Pakhi will ask her to leave Nagpur along with her daughter. She will state that Sai can go anywhere she wants and assures that she will provide all the expenses. Meanwhile, Sai will see Virat and take his name, while Pakhi will turn and see him glaring at her after hearing their conversation.

Will Virat changes his decision?