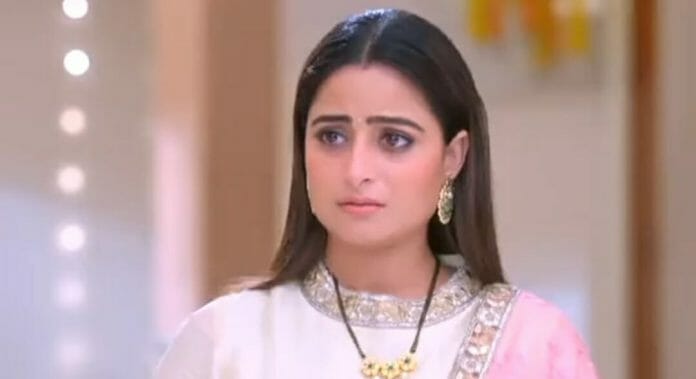 Star Plus popular daily soap Ghum Hai Kise Key Pyaar Meiin have garnered a huge amount of audience. The gripping storyline filled with twist and turns makes it engaging to the viewers. Previously, Ashwini called Sai and took her permission to invite Savi for the welcoming ceremony in Chavans house.

The latter agreed to it and then made a handmade dress for Savi. She also tried to find a job in order to become financially independent. Whereas, Virat and Sai got into argument for the luxury he provided to Savi.

In the current track, Savi selects Virat’s dress instead of Sai’s handmade one. They takes her to the Chavans house, while Ashwini thinks about buying a gold chain for Sai but hides her intentions from other family members. She gets into dilemma whether to give the chain to Sai or not. Whereas, Sonali mocks her about it.

Here, Pakhi ask Ashwini to taste her handmade sweet dish while the latter tells that it lacks sweetness. Sonali again comments upon Pakhi’s life and says that it is bitter. Pakhi gets lost in her thoughts and recalls the phase of her life. She agrees to Sonali and then goes aside.

Virat comes along with Sai and Savi while Ashwini showers her love to the latter. Ninad also pampers her and then they prepares for the ritual and ask Savi to leave her footsteps on the clothe while entering the house.

Ahead, Savi completes the ritual but was about to fall down when Sai comes there and her footprints also gets captured. Everyone becomes shocked while she apologises stating that it was a mistake.

Pakhi assures that everything is fine and starts cleaning the footmarks of Sai. Everyone feels bad seeing her state, while Ashwini starts the other rituals for Savi. Vinayak ask if they have done the same with him, while Virat replies negatively and makes him understand about his situation.

Later, Bhavani cuts Savi’s hair stating it to be a tradition. She was about to go from there when Sai becomes suspicious about her and stops Bhavani, while everyone gets stunned and looks at her.

Now in the upcoming episode, Virat will give a paper to Savi while she ask about it. He will make her open it while Sai reads it and finds it to be the admission form of Savi’s new school. Virat will tell that Savi will also go to the same school as Vinayak as it’s the best. Sai will confront him and scolds that he have taken a decision without her consent, while he will tell them that he appointed the interview with the principal for Savi’s admission on the next week. He will also tell that he appointed a tutor who will teach Savi about the interview, while Sai will question that if he is doubting her teaching skills and proclaims that Savi can easily clear the interview. She will ask him to keep it the next day while he agrees and challenges her teaching.

Will Savi get admission in the school?

Will Bhavani get successful in her plan?