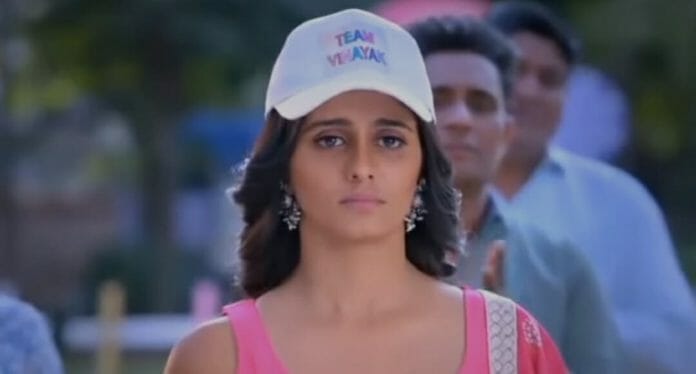 Star Plus popular daily soap Ghum Hai Kise Key Pyaar Meiin have garnered a huge amount of audience. The gripping storyline filled with twist and turns makes it engaging to the viewers. Previously, Virat tried to notify Pakhi about Vinayak’s truth but the latter denied to listen to him. Sai determined to get Vinayak back at any cost, while Bhavani gave a motivation speech for the ladies.

Pakhi got taunted by the women’s while the latter took a stand for herself and declared that she already have a son. Vinayak appreciated Pakhi for her speech and expressed his love for her. Meanwhile, Mohit gave a surprise to Karishma.

In the current track, Savi and Vinayak gets excited for the clay competition organised by their school. They practice for it and Savi gets impressed by Vinu’s talent. Meanwhile, Sai and Usha along with Chavans went to the school to support their kids.

Here, Pakhi shows her support towards Vinayak and gives cheering caps to all the family members. Sai also brings banner for Vinayak to support him while Pakhi and Bhavani gets irked by her behavior.

Bhavani questions that why Sai isn’t supporting her daughter Savi and instead have eyes on Vinayak. She taunts thr latter while Sai replies back that when Bhavani will find about the truth, then she will regret her words.

Ahead, Pakhi goes to the washroom while Vinayak gets into trouble. Sai rushes towards him and assures to help him. She goes inside the school to clean his color palate, while Pakhi feels that someone is following her.

Pakhi goes inside the washroom and someone takes her purse. She gets worried and then sees Sai carrying her bag. She lashes out at the latter while Sai tells that she found the purse on the floor.

Later, Vinayak wins the competition and dedicates his victory to Pakhi. Chavans decides to celebrate with a party while Virat tried to tell the truth to Pakhi but she ignored him and goes to the shopping with Vinayak.

Now in the upcoming episode, Sai will run towards Pakhi and ask about Vinayak. The latter will point gun at Sai and ask her to step back. She will say that she won’t give her son to anyone, while Sai will face her fearlessly. Pakhi will point the gun at her head and threatens to kill herself.

At that time Virat will come there and becomes shocked seeing the scenario. He and Sai will try to stop Pakhi, while they all will hold the gun and it gets fired.

Will Pakhi find about the unknown person?

Will Pakhi give Vinayak to Sai?