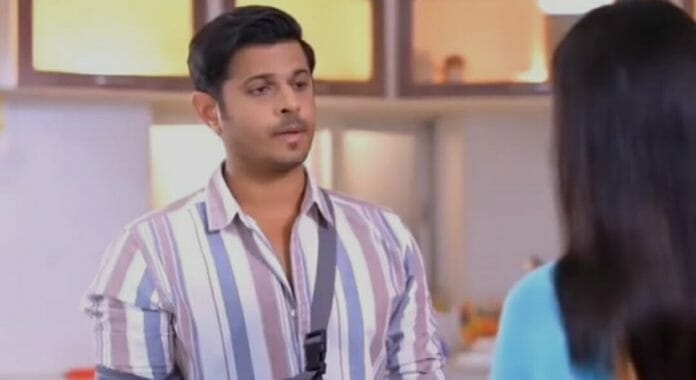 Star Plus popular daily soap Ghum Hai Kise Key Pyaar Meiin is grabbing the attention of the audiences. Viewers are loving the track, whereas the twists in the story is keeping them hooked to their television screens.

Previously, Virat apologised to Pakhi for forgetting her birthday, while Chavans planned to surprise the latter. Meanwhile, Virat decided to leave Kankauli and convinced his family for it. Usha stopped herself from telling the truth about Savi to Virat, after noticing that he had moved on in his life.

In the current track, Pakhi tries to convince Virat to get properly treated by Sai but the latter denied. She calms him down and assures that she will always be with him. Meanwhile, Sai feels hurt seeing them together, whereas Pakhi notices her and confronts the latter about the situation.

Here, Pakhi shows her gratitude towards Sau for helping Virat and Vinayak. Whereas, the latter controls her emotions and act professional in front of her. Meanwhile, Sai advices Pakhi to let Virat rest for sometime as it’s not good for his health to travel.

At that time Virat comes there and rebukes Sai. He ask her not to interfere in his life and gets adamant to leave Kankauli. He takes Pakhi along with him, while Sai gets teary eyes after hearing his hurtful words.

Ahead, Savi insists to say goodbye to Virat and Vinayak but Sai prohibited her. The latter gets stubborn and reaches the police headquarters but couldn’t able to meet them. Savi gets heartbroken while Sai also warns her daughter not to contact them.

Vinayak also misses Savi, while Virat ask him to forget about them. Whereas, Chavans welcomes Virat along with his family and decides to arrange a party for Pakhi on her birthday.

Later, Virat injures himself recalling Sai while Pakhi stops him and calms him down. He praises her nature while she gets close to him but then realises their situation and back off. She advice Virat to tell Chavans about Sai but the latter denied.

Now in the upcoming episode, Sai will give rose to Savi as the latter loves it, while Savi will get elated and hugs her mother. She will then gives it to Vinayak stating that he is her best friend, while he will also get happy and thanks her. He will then give it to Virat and ask to give it to Pakhi as it is her birthday?

To which Virat will get confused, while at that time Pakhi will come there and sees the rose in his hand. Vinayak will hide behind the chair and will smile looking at his parents.

Will Pakhi be able to calm Virat?