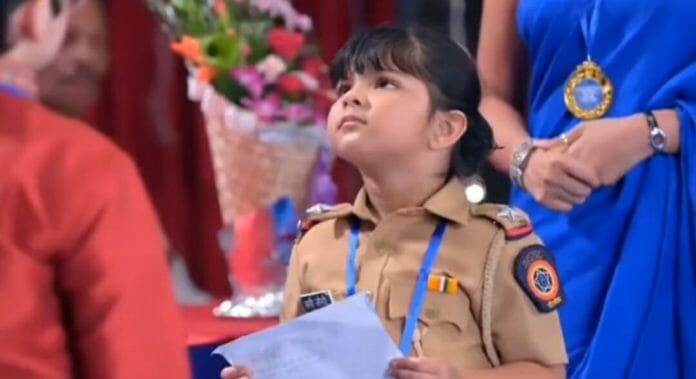 Star Plus’s top rated show “Ghum Hai Kise key Pyaar Meiin” has been entertaining the audiences with its exciting twists and plots. Previously, Savi and Vinayak saved themselves from the child trafficking gang and then landed into another problem, while Sai and Virat risked their life to save their kids.

Sai got a nightmare about getting separated from Savi, whereas Virat notified the latter about a good news that she and Savi are getting awarded for bravery along with him and Vinayak.

In the current track, Sai happily shows the newspaper article to Savi and proclaims that she is getting prize for her bravery. The kids gets elated after finding about the news, while Virat confronts Sai about her being emotional during the Ram-Leela play. Sai lies to handle the situation, while Virat goes away from there.

Here, Sai gets worried for their financial problems and decides to find a new job as soon as possible. Whereas, Bhavani gets furious seeing Sai and Savi’s name nominated for the bravery award.

Sai and Savi attends the award function while Chavans gets happy seeing them except for Bhavani and Omkar. Everyone compliments her attire as she wears a police officer outfit.

Ahead, Vinayak ask Bhavani to sit on the back seat and gets the seat near him for Savi. Bhavani gets furious and scolds Savi for manipulating Vinayak. Shivani ask Bhavani not to get jealous of kids, while Omkar shows his support towards Bhavani.

The host appreciates Virat, Sai, Vinayak and Savi for their bravery and tells that how they helped the police to catch the child trafficking gang. Everyone claps for them while they gets on the stage and gets awarded.

Later, Savi demands to take medal from Virat and gives an emotional speech. She says that she haven’t seen her father but Virat resembles him and insists him to be her father. Everyone gets shocked while Sai takes her away from the stage. Sai lashes out at Savi and then sends her back to home along with Usha and herself stays back on the road being devastated.

Now in the upcoming episode, Virat will recall his moment with Savi where she asked him about her father. He will get into turmoil and questions himself that why Sai hasn’t told Savi about his father. He will state that Sai always wants things to be her way and proclaims that she thinks he is wrong because once in past he didn’t agreed to her and stood with his family instead of her. He will get flashes of the time when Sai left the house with Vinayak. Meanwhile, Virat will determine to help Savi and proclaims to find her father.

Will Virat agrees to help Savi?

Will Savi learns about Virat being her father?