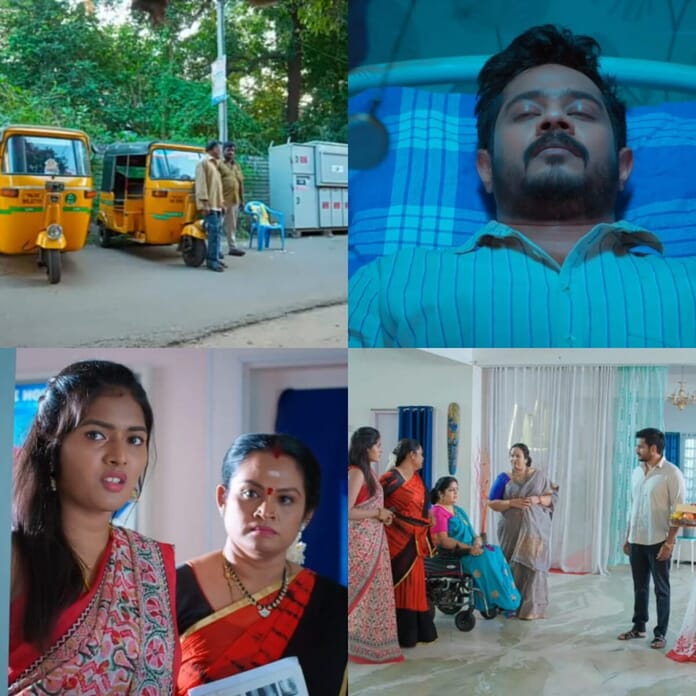 In the previous episode, Arjun was stunned to see Shalini and his wedding video. Suchitra promised to unite Shalini with Arjun. Suchitra sent Vasu out of the house. Arjun searched for Vasu. Arjun expressed his love to Vasu. Arjun is unable to bear Vasu’s sorrow. Gandhimathi, Suchitra, Sarojini, Shalini are unhappy to see Vasu. Arjun tried to get romantic with Vasu.

In today’s episode, Meenakshi and Vasu looking for the auto driver to learn the truth. They reach the auto stand. A shock for Vasu and Meenakshi. Ranjith kills the auto driver. He informs Gandhimathi about his deeds. Shalini takes Sarojini for the general checkup. There, Shalini notices Vasu and Arjun. Sarojini and Shalini follow Arjun. Arjun seeks the Doctor’s help to find the truth. The doctor examines Arjun. Shalini overhears the conversation. Arjun and Vasu fail to find the truth. Shalini irks to see Arjun and Vasu together. Sarojini plans to unite Shalini with Arjun. She advises Shalini. The office staff invites Arjun and Vasu for his wedding. Sarojini asks for justice to Suchitra. Arjun is happy with Sarojini’s decision.

Will Sarojini vacate Arjun’s home?
Who ties a knot in Shalini’s neck? Is this Sarojini’s evil plan? Will Vasu catch Ranjith? Will Meenakshi notice Ranjith? All these questions will be answered in the upcoming episodes. To know what will happen next in your favorite show Gokulathil Seethai, stay tuned to this.