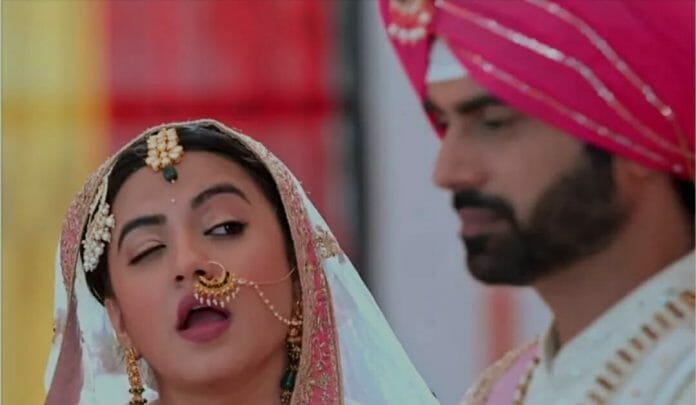 Gud Se Meetha Ishq depicts the rollercoaster journey of a young couple Neel and Kajal who got married in an unusual circumstance on Star Bharat and Hotstar. Currently we are seeing that Pari teaches Dev how to tell I Love You. Dev says I Love You to Pari. Later, Nimrit asks Pari to celebrate Suhagraat with Dev.

In the previous episode, Pari told Dev that he is both teacher and husband of her now. But Dev had committed a mistake by not saying her I Love You yet. He taught Dev how to say it romantically. Dev followed her instructions.

Neel shouted and asked Kajal to not leave. Later, he realised that it was a dream. Nimrit complained about Dev to Navdeep for marrying a mad like Pari. Navdeep said that his buisness wasn’t doing well, he was in huge debt. Nimrit asked Pari to celebrate Suhagraat with Dev in order to make their marriage valid. Pari agreed for it.

In the upcoming episode, Pari shouts and says that she has to celebrate the ritual. Dev tries to convince her but she throws away stuffs. Kajal tells Neel when she wanted him to understand her, he ignored Kajal. Relationship is not like a kite and none made her feel the same way like him.

Will Dev and Pari celebrate their Suhagraat? Will Nimrit keep manipulating Pari? Will Neel accept Kajal’s love for him? Will Neel and Kajal mend their relationship?