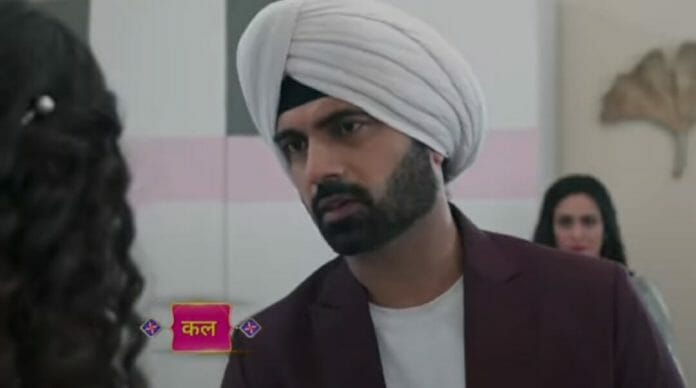 Gud Se Meetha Ishq depicts the rollercoaster journey of a young couple Neel and Kajal who got married in an unusual circumstance on Star Bharat and Hotstar. Currently we are seeing that Bhoomi, Pavitra hide Neel’s job letter and put blame on Kajal. Neel misunderstands Kajal. Chandni asks Dev to choose either Pari or Noor and her. Pari requests Chandni to not separate Dev and Noor. Chandni calls Pari selfish and asks her to leave Shergill house.

In the previous episode, Bhoomi received the flower bouquet and job letter that came for Neel. Kajal was busy in cleaning the floor. Bhoomi hide the job letter seeing her and said that an admirer of Neel sent the bouquet. Kajal believed her. Bhoomi and Pavitra secretly dropped the letter and envelope on the floor so that Kajal can throw those away with dirt.

Kajal noticed the envelope but didn’t understand anything. Chandni told Dev that Noor was not safe with Pari and she could not afford to lose Noor. Dev defended Pari saying that she didn’t do anything intentionally and she would not go near Noor.

Chandni said that she could not take risk and asked him to choose either Pari or her and Noor. Dev said that Pari won’t go anywhere. Pari requested Chandni to not take Noor away from her and Dev as they need her. Chandni asked Pari to exit from their lives.

Neel learned about the offer letter from his friend. He questioned Kajal. Pavitra made Neel believe that Kajal threw the letter away while cleaning the floor. Neel vented his frustration on Kajal for shattering his dream.

In the upcoming episode, Neel gets shocked seeing Pavitra dressed up like Kajal. He asks her about Kajal’s whereabouts. Pavitra says that Kajal has left forever and she has taken the decision for Neel’s betterment. Noor informs Dev that Pari was innocent that day as she shot herself by mistake. Dev gets shocked.

Will Neel let Kajal go away from his life? Will Pavitra re-enters in Neel’s life? Will Chandni take Noor away from Dev? Will Pari leave Shergill house for Dev’s happiness?