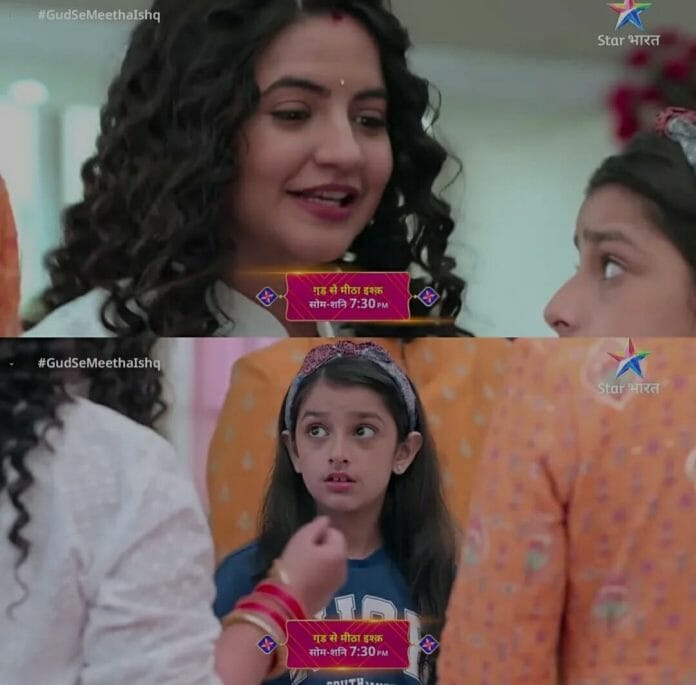 Gud Se Meetha Ishq depicts the rollercoaster journey of a young couple Neel and Kajal who got married in an unusual circumstance on Star Bharat and Hotstar. Currently we are seeing that Dev brings new clothes for Noor and Pari.

In the previous episode, Pari left her chocolates for Noor at her room. Nimrit tried to remove them and told Noor that Pari wanted to tease Noor. Noor got irked and pushed Pari out of her room. Neel failed to find his pendrive and asked Kajal to search for it. Bhoomi overhead their conversation.

He got disqualified. Neel, Kajal arrived at home. Neel got upset. Kajal blamed herself for the situation. Dev brought new clothes for Pari. She informed her about bringing clothes for Noor aswell. Pari became happy. Dev asked Chandni to give the clothes to Noor.

She took a scissor and cut her dress into pieces infront of Dev and Pari. Dev tried to go behind Noor but Chandni stopped him.

In the upcoming episode, Noor calls Pari a liar. Pari says that she is not a liar. Noor asks her to move aside and pushes her. Pari falls from the stairs. Everyone rush to her. Noor gets shocked.

Will Kajal learn about Bhoomi, Pavitra’s evil ploy? Will she be able to cheer Neel up? Will Pari be fine? Will Noor realise her mistake?