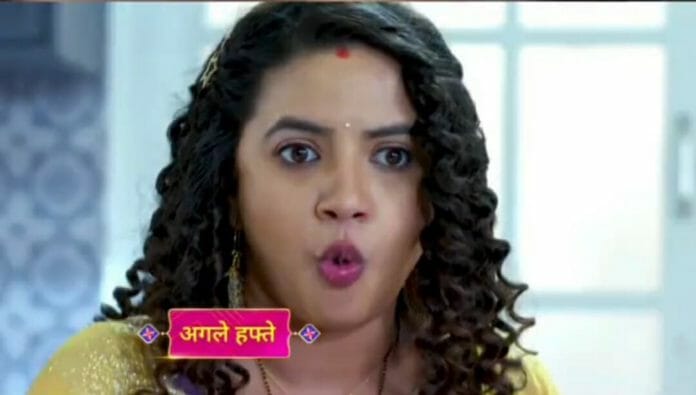 Gud Se Meetha Ishq depicts the rollercoaster journey of a young couple Neel and Kajal who got married in an unusual circumstance on Star Bharat and Hotstar. Currently we are seeing that Pavitra fails to create rift between Neel, Kajal as Kajal shows her trust in Neel. Bhoomi, Pavitra Plan to do something drastic. Dev defends Pari when a customer tries to insult her at restaurant.

In the previous episode, Neel thought about doing romance with Kajal. He saw Kajal’s back and saree. He brought her out of washroom and hugged her tightly. Kajal came to the room and found that Neel was hugging Pavitra. Neel asked Kajal to not get him wrong as he thought Pavitra was Kajal.

Pavitra said that it was her mistake as Bhoomi gave her saree like Kajal to wear. Kajal said that none was guilty. She asked Neel to not give any explanation as she trusted him too much. Pavitra informed Bhoomi that their plan flopped as Kajal didn’t get jealous seeing her in Neel’s arms.

Bhoomi said that they have to do something more drastic that Kajal could neither tolorate nor ignore. They mixed something in the sweets. Dev took Pari to a restaurant. Pari tried to eat using spoon and fork. She threw noodles on a customer by mistake.

The customer insulted Pari, called her abnormal. Dev defended Pari saying that she is as normal as them all but she has bigger heart. He booked the whole restaurant for Pari and made the customer leave.

Dev, Pari danced romantically. Nutan asked Kajal to send prasad to neighbours. Bhoomi told Kajal that she would distribute the prasad. She offered prasad to Neel which he ate.

In the upcoming episode, Pari tries to make sandwich in kitchen. She adds extra chilli powder in the cucumber slices. Later, Nimrit put two cucumber slices on her eyes while applying face pack. She screams as her eyes starts burning.

Will Nimrit lash out at Pari? Will Dev be able to protect Pari from Nimrit wrath? Will Neel fall sick? Will Khuranas misunderstand Kajal?