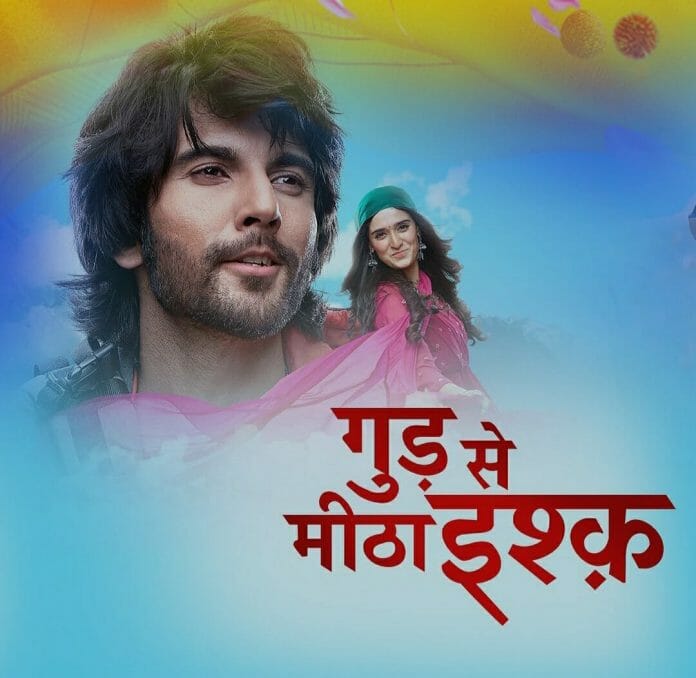 Star Bharat’s popular show Gud Se Meetha Ishq, currently focuses on Kajal supporting Neel after learning about that night. She fails Pavitra’s attempts to separate her and Neel. Dev gets arrested. Pari tries hard to release him from jail. Dhruv’s birthday gets spoiled, he become upset with his family.

We have seen through out the previous week, Pari plans to go for shopping with Dev and informs Nimrit regarding the same. She leaves. Nimrit complains about Pari to her friends who criticizes Pari for her actions. One of them informs Nimrit that Noor is not doing well in studies.

Nimrit thinks that now Noor will learn about Pari’s deed, create havoc in Dev’s life and Dev will kick Pari out of her life. Pavitra delibaretly collides with Kajal who is in rush. Bhoomi wishes to know what Kajal is carrying in her bag. She suggests Pavitra to follow Kajal.

Kajal tries to sell her gold ring at a jewelry shop. Pavitra confronts her and asks her to take her help if she needs money. Kajal says that she wants to gift new camera to Neel. She says that she can’t take money from Pavitra. Bhoomi arrives there.

She and Pavitra tries hard to persuade Kajal. Dev, Pari return from shipping. Dev spots Noor at Shergill house and rushes to her leaving Pari behind. Chandni helps Dev responsible for Noor’s condition. She says that by marrying Pari, Dev has spoiled both her and Noor’s lives.

Pari asks Noor to leave Chandni and stay with her. Noor tries to hit Pari and asks her to leave house. Noor complains that Dev doesn’t give her time. Dev promises to Noor that he will do whatever Noor will ask him.

Pari says that Dev won’t do anything for Noor that he does for her. She forcefully takes Dev away from Noor. Nimrit enjoys from a distance.

Bhoomi and Pavitra convinces Kajal to take money from Pavitra. Kajal puts forth a condition that Pavitra has to keep her ring mortgaged till she doesn’t return her money. Pavitra agrees. Pari doesn’t let Dev meet Noor. Dev says that he is both Pari’s husband and Noor’s father.

She asks how can Noor be Dev’s daughter when Dev is Pari’s husband. Dev gets speechless. Nimrit blames Chandni for whatever happened. Nimrit asks Noor to forget Dev as Pari won’t let him come to her. Neel becomes happy seeing his new camera.

Kajal asks him to accept it as her apology as she made him upset earlier. Bhoomi asks Pavitra what she is trying to do by helping Kajal as the gift will bring Neel, Kajal closer. She says that her money will become the reason of Neel and Kajal’s separation.

Neel talks about the night when he was not there in the room. He asks Kajal if she doesn’t doubt him. Kajal says that she trusts Neel more than herself. He asks her to fight with him so that he can come out of his guilt.

He says that he spent night with Pavitra and according to Pavitra they crossed all limits. Dev says that he has to handle Noor as he is her father. He leaves. Nimrit tells Noor that Dev doesn’t care about her. Dev comes there. He says that he will make things better for Noor. Noor calls him a bad father and leaves with Chandni.

Kajal slaps Neel and says sorry. She questions him about his point of view about the incident. Neel says that he spent whole night on Pavitra’s bed, he doesn’t know anything else but according to Pavitra they crossed all limits.

She says that she believes that Neel can’t do anything wrong with Pavitra as he doesn’t even love her. Pari tries to make tea for Dev as she feels that he is upset with her. Pari’s dupatta catches fire. Pari screams. Dev tries to stop the fire using his hands.

Pari hugs Dev. Dev tells Pari that he is not upset with her. Pari blows on Dev’s burn. Dev asks her to promise that she will take care of herself hereafter. Neel thanks Kajal and says that he knows Pavitra was lying but he could not defend himself as he doesn’t remember anything about that night.

Kajal stops Neel and says that they will let Pavitra stay at their place. Pari requests Dev to not meet Chandni and Noor ever. Pari complains that Dev doesn’t give her time now.

Noor overhears their conversation. Chandni says that she can’t let Noor become friends with mad Pari. Dev says that Pari is not mad but Chandni is mannerless. Noor calls Nimrit and informs her about Dev and Chandni’s conflict.

She asks Nimrit to come over. Nimrit suggests Noor to dial 100 and call police at home as they can help her.  Dev says that Pari is a slow learner, she is like Noor not mad. Khuranas plan to celebrate Dhruv’s birthday with home cooked foods and keeps flowery theme for the party.

Chandni spots Noor and tries to act great. She says that she will dedicate her whole life for Noor, won’t marry second time unlike Dev. She says that Dev kicked her out of his life delibaretly so that he can marry Pari.

Flashback shows how Dev pleaded before Chandni to stay back in his life for Noor but she left him as she wanted to live a luxurious lifestyle. She took Noor away from him and warned him to not contact her ever.

Chandni says that Dev doesn’t care about Noor. She says that Pari can harm Noor which she can’t tolorate. Noor opens the door for police.

Police asks Noor what happened to her mother, why she called them. Noor says that her father is troubling her mother. Nimrit asks Dev what was the need to come here. Dev says that he came to sort things out. He says that he has come after taking Chandni’s permission.

Chandni keeps silent. Nimrit informs Police that Pari is Dev’s second wife. Court ordered him to not meet his first wife Chandni after separation but he broke rules for Noor. She requests Police to spare Dev. Police says that they will arrest Dev for emotionally torturing Noor.

Dev says that he didn’t do anything, asks her to enquire from Chandni. Chandni keeps quite. Police arrest Dev. Nimrit asks him to not worry as she will come to release him. Nimrit criticizes Chandni for divorcing Dev and taking the settlement money.

She informs her that now Dev earns way too much than earlier which Pari is exploiting. She also says that Noor won’t get anything as Pari will get everything Dev has. Nimrit asks Chandni to follow whatever she says. Neel gets romantic with Kajal.

Bhoomi spots them together and gets speechless. She informs Pavitra about Neel and Kajal’s closeness. She says that Pavitra’s plan had flopped and asks her to do something. She delibaretly collides with Kajal and drops old pictures, cards, letters of her and Neel.

Kajal notices them and stays unaffected. Lawyer says that it will be best if Chandni takes her case back. Nimrit says that she tried hard but could not convince her. Dev complains about Chandni and worries for Pari. He goes to call Pari. Police snatches his phone and puts him behind the bars.

Nimrit informs Pari about Dev’s arrest and blames Chandni for everything. Pari says that his uncle is a lawyer, he will definitely bring Dev out of jail. She leaves for Khurana house with Nimrit. Pavitra hands over Kajal’s ring to Neel. Neel asks her about ring.

She says that Kajal mortgaged her ring and took 5000 rupees from her. Neel gives 5000 rupees to her that Sonia gave him for photography competition.  Dev requests police to let him talk to his wife once. Police asks with whom Dev wants to talk to, 1st wife or 2nd wife.

Nutan asks to not cut cake and wait for Pari and Dev. Bhumi tries to instigate Dhruv saying that his family cares for Pari more than him. Pari arrives there and informs about Dev’s arrest. She requests Jaidev to release Dev. Khuranas leave for the police station leaving Dhruv’s birthday.

Druv destroys his birthday cake in anger. Police says that it’s hard to get bail for Dev as he is accused with domestic violence charges. She adds that Chandni taking her report back is the only solution left now. Pari reaches Chandni’s house with Neel and Kajal.

Pari says sorry to Chandni for misbehaving with her earlier. She requests her to asks police to leave Dev. Chandni says okay and wishes to talk to Pari alone. Pari leaves Kajal’s hand and goes with Chandni.

Will Dev come out of jail? Will Chandni withdraw her case? Will Noor and Pari become friends? What will be Pavitra’s next move?

All of these questions will be addressed in future episodes.