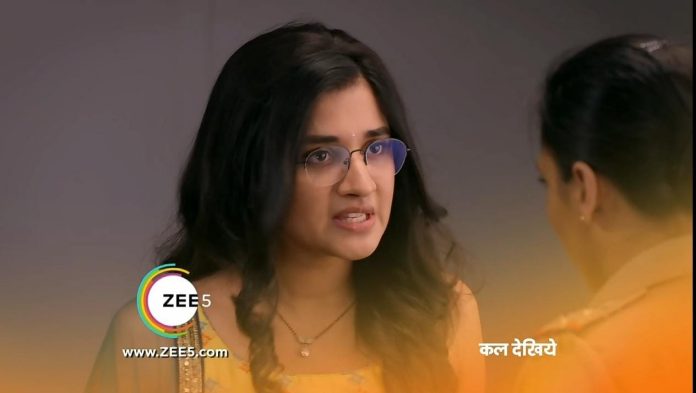 Episode starts with everyone coming in Choti guddan’s room and they get shocked seeing Nia in that condition. Arav asks why are you here? Pushpa starts blaming Agastya that how can he spend a night with another girl when he is already married. She says its complete wrong. I cant accept it. Choti made me a changed person now I can’t tolerate a wrong thing.

Agastya says nothing wrong happened between now us. Nia starts her drama saying now how will I show my face? I have lost my parents already. Now after this incident my life is ruined. I should die. Agastya tries to talk to Choti guddan but she starts screaming and says I want to talk to my mother. Arav says badi guddan has gone for some urgent work. Choti starts crying and leaves angrily. Nia wakes up and hugs Pushpa. She says without doing anything this much misunderstanding has been created. Pushpa smiles at her and says just wait and watch.

Agastya tries to talk to Choti but she looks really upset. She says everything is finished. This shouldn’t have happened. Agastya tries to make her understand but Choti says at first I want to talk to my mother. I don’t want to listen to you. Agastya gets a phone call and he goes to meet Badi guddan.

Badi guddan says to Agastya this shouldn’t have happened to you. Now you know what shall we have to do for Choti. Agastya touches Badi guddan’s feet and suddenly pushes her and Badi guddan falls down. Agastya recalls what Badi said he doesn’t deserve Choti.

Choti tries to call Badi but she doesn’t pick up the call. She asks Arav where has she gone? Arav says maybe Badi guddan left us forever as you didn’t agree with her. You brought Pushpa back in the house. That’s why she is angry. He says now this another incident happened between Agastya Nia. He believes that Nia is surely telling a lie, Agastya cant do something like this. Choti says Agastya was not his senses. He couldn’t tell me anything properly. I am getting confused. She gets tensed for Badi guddan as well. Arav says don’t worry.

Nia throws arrow at Choti’s photo. She says when will this Choti go from Agastya’s life? Agastya then throws another arrow. Pushpa gets shocked and she tries to give excuses but Agastya says I know it was all your planning. He shockingly says that Pushpa should continue her acting in front of guddan because she doesn’t know the truth. He says I am your son. Your blood is in me so I too acted well.

Pushpa gets surprised hearing all this. Agastya says now we should succeed in our plan. I want to separate myself from that guddan else she will make an ass like her. Pushpa smiles and says we were afraid without any reason. I knew you can never leave my side. She says now after the divorce I will make sure you get married to Nia. Nia gets excited. Pushpa says its not that easy. Choti’s mother Badi guddan is so clever. She can stop us. Agastya says I have finished Badi guddan’s chapter forever. Pushpa and Nia become happy. Agastya says now I will do something big in the party so that Choti herself will tell me to marry Nia.

Choti looks sad she cries a lot recalling all the memories related to Agastya. (Tujhe bhula dia plays in background) she tries to leave the room and she bump into Agastya. They stare at each other. Their souls hug each other and Choti thinks why have you done this Agastya? You have broken my trust.