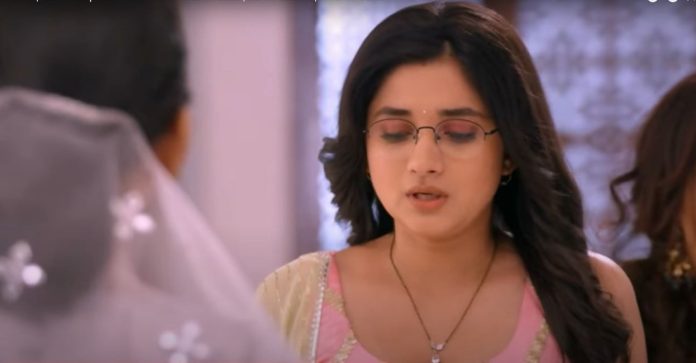 Episode starts with Agastya trying to catch Guddan. He catches her and they stare at each other romantically. Agastya applies haldi on Guddan. Nia’s parents, Nia and Pushpa observe them in that position. Nia says now I’ll stop her. Pushpa stops her and says Guddan also wants it that you do something stupid out of anger. Nia’s parents tell Pushpa that what is all this? Have you invited us to show us this kind of drama? Pushpa requests them that don’t be angry. Everything will be fine after the marriage. Nia’s mom says I don’t think this marriage will happen. Pushpa says don’t worry. Nia has done so much to get Agastya. Guddan opens the door and she leaves being shy.

Arav claps and cheers for Guddan. Mani says that Nia’s face was so funny when Agastya was running behind Guddan. Arushi also says good job. Guddan says Pushpa is thinking I am happy with this marriage but I am planning to get her punished. I have proofs as well. Arav says now you proved that Badi Guddan’s daughter. Choti says I have learned this from her only. I am missing her so much. She says maybe Pushpa is behind this. Shona says Pushpa doesn’t have balls to do it. She says everything will be alright very soon. Pushpa and Nia overhear them.

Pushpa says so this was Guddan’s plan. She is so stupid that she was telling about her plan loudly. Nia says I am worried for my marriage. I don’t think it will happen tomorrow. My parents are also angry because of that Guddan. Pushpa says you will get married to Agastya that’s final. Nia says what if Agastya refuses to marry me. Pushpa says then there’s only one plan left. We shall kill her. Badi Guddan has left already now we shall end Choti’s chapter as well. Nia agrees.

Pushpa Nia meet Guddan in a dark room. Guddan asks what are you doing here? Pushpa suddenly tries to hit Guddan with a stick, Guddan moves aside and mistakenly that stick touches electric wires and Pushpa gets electric shock. Nia touches her and she too gets shock. Guddan says wait I’ll help you. She hits them using a stick . they both fall down and then somehow they get up. Pushpa gets angry seeing Guddan smiling. She again picks up the stick and tries to hit her. Guddan reminds her of the previous hockey stick incident. She says I am doing what you said. Agastya is marrying Nia then what’s the problem? Pushpa says don’t try to fool us with your innocent face. I know your truth now you I’ll kill you. Guddan says please stop at least tell me the reason.

Next day Agastya gets ready and comes downstairs. He sits on mandap. He thinks about Guddan that he thought he will make her feel jealous but now she is not here means she doesn’t care anymore. Agastya asks Arushi that where is chashmish? Arushi says she doesn’t know. Pandit asks for dulhan. Agastya gets tensed for Guddan. He thinks why hasn’t she come yet? She loves me then why is she not stopping this marriage?

Nia comes in normal get up. Her father asks why isn’t she ready? Nia says I won’t marry Agastya. Everyone gets shocked. Agastya calls Guddan loudly. Guddan comes and she says why Nia doesn’t want to marry Agastya? She loves him right? Shona says what happened suddenly? Nia’s parents ask Pushpa what is this? Pushpa says I have made all the arrangements but Nia refused to marry Agastya.

Guddan recalls last night incident where she said she will again file a complaint against Pushpa and Nia if they harm her. Pushpa says do you have any proof that we tried to kill you? Pushpa herself confesses all her crimes excitedly. Guddan says I had no proof earlier but now I have. Shona and Mani record all of that what Pushpa said. Pushpa Nia get shocked.