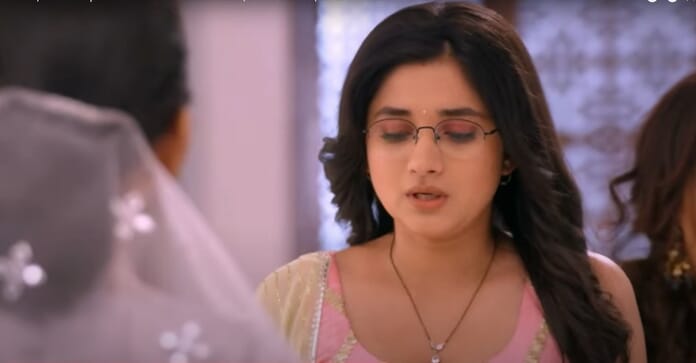 Episode starts with Agastya entering the house. Guddan tries to talk to him but suddenly one person pulls Agastya aside and asks for money. He says give me money else I’ll reveal your truth. Agastya gives him some cash and Guddan gets shocked watching all this. She stops that guy who came by covering his face. He is none other than Mani. Guddan asks why were you threatening Agastya? Mani gives excuses and says he covered his face for style. Guddan says stop lying. Tell me the truth. Mani says we’ll handle it. Don’t worry.

Agastya gets a chit in his room. Someone blackmails him saying he will reveal Agastya’s true colors if he doesn’t give rest of the money to the blackmailer. Guddan brings tea biscuits for Agastya but he leaves after throwing the chit to dustbin. Guddan sees it and she grows suspicious. She doubts Mani. Agastya then comes to take the car keys and Guddan asks what is he hiding from her? Something is wrong for sure. Why is Mani blackmailing him? She shows him the chit but Agastya avoids the topic and says he has no idea about it. Guddan says Agastya is hiding something. She decides to follow him.

Agastya goes to meet someone. He asks what do you want? Mani shows his face and Agastya gets shocked. Mani says he wants money. Agastya says i have given you already. Mani says he wants even more. Else he will show the pendrive to everybody which has proofs against Agastya. Agastya attacks him and snatches the pen drive. He was about to leave but he falls. Guddan takes the pendrive and watches the clip in laptop. When she sees that Agastya pushed Badi Guddan she gets a huge shock. She screams. She starts accusing Agastya looking at his photo. She says angrily that Agastya took advantage of my kindness. I won’t spare you.

Choti comes downstairs and Agastya asks Guddan what happened? Guddan gets angry on him. She says stop acting. Why did you do this to my mother? What was her fault? Just that she took me away from you. But I trusted you. I took your side. Then why did you destroy my life? I met my mom after 20 years. Agastya says yes I killed her. When I didn’t listen to my own mother. Then why will I listen to your mother? She tried to make me gharjamai so I sent her to God. Guddan says how dare you? I will give proofs to police. You will get punished. Agastya says I won’t let you do it. Guddan loses her control and says then I myself will give you punishment. She tries to hit Agastya with something. Suddenly she hears Badi Guddan’s voice. Choti gets really happy. She starts crying.

Flashback scene appears where Agastya was really worried that how will he prove nothing happened between him and Nia. Nobody will trust him. Badi Guddan comes and tells him about a solution and says he has done nothing wrong. Pushpa and Nia have done all these. She says there’s only one way to reveal the truth in front of Choti. He has to kill his mother in law.

Choti hugs her mother and says sorry to her that she didn’t trust her. Badi says she had no other option. Mani heard about their plan that’s why they included Mani in their plan as well. Badi says Choti needs to say sorry to Agastya as she didn’t trust him once again. Choti goes to Agastya and says can you forgive me? Agastya smiles at her and says you are my life. You changed my life. You don’t need to say sorry to me. I am the luckiest guy in this planet. I am proud of you. He then kisses her forhead. Choti gets emotional.

Mani and others join them and praise Choti. Rashi says she is the proudest. Shona tells Choti to smile. Arav says to Badi Guddan that she scared everyone. Badi says my tricks are always appropriate. Agastya says yes my youngest mother in law is unique.

Police arrive at that moment. Shona gets tensed and asks now who did what? Pushpa and Nia confess their crimes and Pushpa says I have decided to accept the punishment. Nia too says the same thing. Pushpa tells Agastya that it was all my fault due to which you maintained a distance from me. Choti has no fault in it. She apologizes to Choti as well. Pushpa says she was unable to see Choti’s good nature and that is why she deserves this punishment. Pushpa asks Choti can she ever forgive her? Choti looks at her.