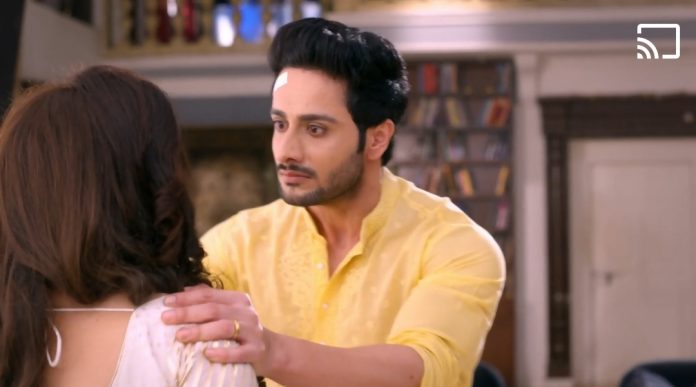 Episode starts with Agastya calling Guddan and she is about to receive the call but Aarav stops her and says you can not talk to him because your mother ordered this. Choti asks him why are you also doing this? Aarav asks her to adjust and says to Agastya that your wife is with me but I can’t let you talk with her at this moment.

Agastya is trying to meet his wife and he comes to the kitchen and notices that something is cooking there and he thinks my wife must be here. He is checking the dish cooking and suddenly notices that it is Aarav there who is cooking.

He calls him the enemy of love who is preventing him from meeting his wife. He says this wrestling brother and that grumpy mother-in-law of mine is not letting me meet my wife but I will not accept my defeat this easily. He comes to his room and he sees someone is sleeping in his room and he thinks it is his wife Guddan and he secretly goes and hugs that person from back and does not realise it is Aarav who is sleeping under the blanket and he is about to kiss him thinking him as his wife.

However he realises later that it is Aarav and he asks him why are you being the enemy of my love and making it difficult for me and he thinks that he will have a conversation with his mother-in-law Guddan. He turns and sees his mother in law in the room and he asks her why are you doing this? She says let me start from the very start that at first your mother beat my daughter with a hockey stick and made her a living dead body and then she tried to kill her in the hospital even when she didn’t succeed in all these then she tried to prove her mad in the house.

All these happened because you are not capable of protecting her and that cost her a lot of trouble in life. Now that is why I am trying to make you strong so that in future you can take a stand for your wife, your upcoming child and Rashi because these people are your responsibility and you have to do your share of work. So now it is your call to stay with my daughter in this house or I will get my daughter married with some other good guy immediately.

Agastya declines to go along with Pushpa and says I will stay with my wife here in this house only. Guddan says not only that Agastya will punish Pushpa also and Pushpa gets angry to hear this and she starts to beat herself with a hockey stick in front of Agastya as a punishment.

Later, Agastya himself beats his own being due to the fact that his mother hits herself in front of him and he has to see this being a son and Guddan sees this and she says to her mother that I am not at all happy with whatever happening and moreover I am not understanding your difficult way of dealing with this things. Guddan tries to make her daughter understand why she is doing all these but she doesn’t listen to her and walks out of there.